AOC Would Be Banned From Facebook By Her Own Standards 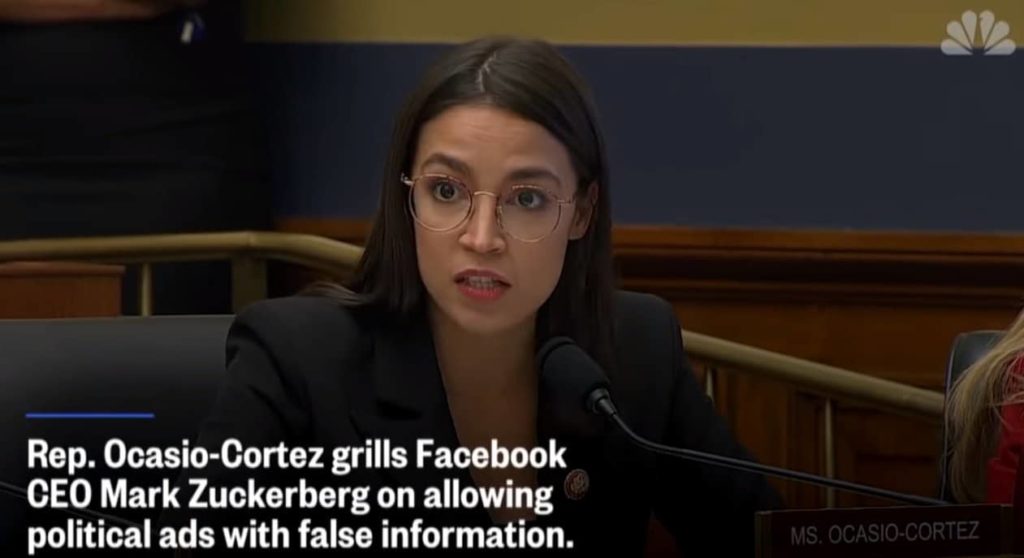 As Facebook becomes increasingly influential in modern life, Congresswoman Alexandria Ocasio-Cortez thinks that the website needs its own Ministry of Truth.

During a recent congressional hearing with Facebook founder Mark Zuckerberg, AOC expressed outrage that the website doesn’t comb through tens of billions of posts to identify falsehoods – at least when it comes to political ads.

“Do you see a potential problem here with a complete lack of fact-checking on political advertisements?” she asked. Zuckerberg replied that he thought lying was wrong, to which an unsatisfied AOC replied “So you won’t take down lies or you will take down lies? It’s a pretty simple yes or no.”

It’s great to see that AOC finally has an interest in the truth! Ironically, if AOC were held to her own standards, she wouldn’t be allowed on the website at all. Let’s take a look at just some of her whoppers.

Are you ready for doomsday 2031? AOC sees that as a strong possibility, and often quotes from a deeply flawed UN study claiming that we only have 12 years until we reach climate Armageddon.

.@AOC on millennials and social media: "We’re, like, the world is going to end in 12 years if we don’t address climate change" pic.twitter.com/HjhbVyfFN4

Except, we’ve heard this before.

At the UN’s Rio Climate Summit in 1992 top scientists said we only had 10 years to get climate change under control, so clearly the goalpost has been moved throughout history (and there are dozens of similar examples). Three years prior, in 1989, a senior UN environmental official predicted doomsday by the year 2000, by which “entire nations could be wiped off the face of the Earth by rising sea levels.”

By AOC’s own standards, Facebook shouldn’t allow her to attempt to spread dubious information like this, but we all know that her real goal is to censor us, not actually combat “fake news.”

AOC Doesn’t Know Who Her Own Coworkers Are

It wasn’t long ago that AOC falsely accused a man of sexism she believed to be a Republican politician – who was anything but. The Republican Party of Kentucky posted a photo of Democrat Rep. John Yarmuth next to a cardboard cutout of AOC, trying to make the point that the two had a shared socialist agenda. AOC apparently interpreted this differently, and accused Republicans of allowing their “older male members [to pose] next to cardboard cutouts of young female legislators.”

But as you know, Yarmuth is a Democrat…. and is a member of the Congressional Progressive Caucus, of which AOC is also a member.

How didn’t she recognize someone who she works with?

After her claim that “I think it’s wrong that a vast majority of the country doesn’t make a living wage” was fact checked by the Washington Post, receiving their second-worst rating (three Pinocchios), AOC went after one of their sources.  She blasts one of studies used to refute her claim (from the Mackinak Center) as a “Wal-mart-funded think tank.”

If the point of fact-checking is to enforce some objective standard, why would @GlennKesslerWP use a Walmart-funded think tank as reference material for wage fairness?

That’s like citing the foxes to fact-check the hens.

The very first page of the study AOC is attacking states that “The author has never received payment from Wal-Mart of any kind.”

Again, this is the woman who thinks other people don’t fact check enough.

AOC tweeted out praise of her fellow democratic socialists after the city of Denver revoked $10.6 million in contracts to two for-profit prison companies. The charge against the for-profit prisons was led by Candi CdeBaca, a Democratic Socialists of America backed candidate. Nowhere was any acknowledgment of the tangible effects this would have for the prisoners AOC pretends to care about.

What she didn’t mention was that 500 people out on parole at halfway houses may be forced back into prison as a result. Regardless of your position on the issue, AOC was framing this move as a win for prisoners (and also in the fight against ICE), which it clearly is not.

I selected just a few of my favorite AOC blunders, but there are literally hundreds to choose from. And despite her now-weekly gaffes and inaccuracies, the last thing I’d want is Facebook to be tasked with regulating her. Do we really want a fact checker at Facebook to be the sole arbiter on political truth? Given Silicon Valley’s established left-wing bias, there’s no question how malleable the truth could become.

Even if made specific to political ads, fact-checking and regulating them is easier said than done. Most misleading campaign ads are in a grey-area where the claims are “technically true” but presented in a misleading way to create a narrative. For example, AOC could make a political ad repeating the hysterical rhetoric of immigration authorities “putting kids in cages” and it would be “technically true,” – but would a fact checker mention that this is a continuation of Obama-era policy? Would they mention that Canada has a similar policy? Their own political bias would play a large role in that.

Regardless, it is amusing to note that in a world where AOC wants to regulate political speech on Facebook, Twitter is her preferred platform. I don’t expect to see her calling for the truth to be regulated there anytime soon.