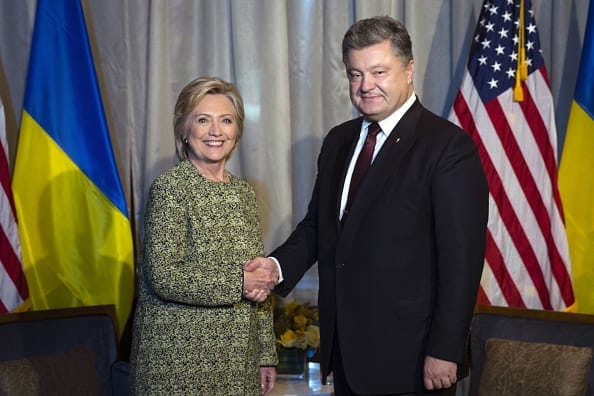 Robert Mueller’s Special Counsel is now over, and at long last, we discovered (to the dismay of MSNBC and CNN) that there was no collusion after all! One listener joked that the Counsel could’ve saved themselves $30 million if they had just listened to the Dan Bongino podcast.

It’ll be amusing to see how the true believers react to their world for the past two years collapsing in. Inevitably some faction of the collusion crazies will claim that Trump sabotaged the report, and I’ve even seen one commentator speculate that “Vladimir Putin got to Mueller.” No word then on why Putin did nothing to prevent a few dozen Russians from being indicted by Mueller (for charges unconnected to the Trump campaign).

There was no Russian collusion with the Trump campaign – but there was plenty of collusion between Ukraine and the Clinton campaign. We extensively documented those connections in our book Spygate, and just as the books’ central thesis of no collusion between Trump and Russia was just vindicated, as were our theories about Ukraninan collusion. According to an explosive new article by John Solomon:

Ukraine’s top prosecutor Yurii Lutsenko divulged in an interview that he has opened an investigation into whether his country’s law enforcement apparatus intentionally leaked financial records during the 2016 U.S. presidential campaign about then-Trump campaign chairman Paul Manafort in an effort to sway the election in favor of Hillary Clinton.

On August 19, 2016, Manafort resigned from the Trump campaign after The New York Times reported that Ukraine’s Anti-Corruption Bureau found a black ledger in a bank vault abandoned by Viktor Yanukovych (the 4th President of Ukraine), showing $12 million in cash transactions related to Manafort. The ledger was exposed by Serhiy Leshchenko, a former Ukrainian parliamentarian, and former investigative journalist.

Days after publishing the ledger, Leshchenko told the Financial Times that “A Trump presidency would change the pro-Ukrainian agenda in American foreign policy. For me, it was important to show not only the corruption aspect but that he is [a] pro-Russian candidate who can break the geopolitical balance in the world.” It’s clear what his motivation was – to collude in an effort to take Trump down.

Yurii Lutsenko’s probe was prompted by a Ukrainian parliamentarian’s release of a tape recording purporting to quote a top law enforcement official as saying his agency leaked the Manafort financial records to help Clinton’s campaign.

The parliamentarian also secured a court ruling that the leak amounted to “an illegal intrusion into the American election campaign,” Lutsenko told me. Lutsenko said the tape recording is a serious enough allegation to warrant opening a probe, and one of his concerns is that the Ukrainian law enforcement agency involved had frequent contact with the Obama administration’s U.S. Embassy in Kiev at the time.

It’s still unclear how Manafort’s black ledger was leaked to America media. The FBI had previously investigated Manafort for his Ukranian business activities but abandoned that in 2014 due to a lack of evidence. The black ledger added a spark to those ambers.. Solomon continues, noting that:

We know the FBI set up shop in the U.S. embassy in Kiev to assist its Ukraine–Manafort inquiry — a common practice on foreign-based probes — while using British spy Christopher Steele as an informant at the start of its Russia probe. And we know Clinton’s campaign was using a law firm to pay an opposition research firm for Steele’s work in an effort to stop Trump from winning the presidency, at the same time Steele was aiding the FBI.

In an interview with Solomon, Lutsenko said that the U.S. Embassy (in Ukraine) interfered in his ability to prosecute corruption cases. He claimed that the U.S. ambassador gave him a list of names of defendants he wasn’t allowed to pursue. He showed Soloman a letter from the embassy that partially supported his story, showing a U.S. official asking him to stand down (view here).

Meanwhile, in America, the DNC’s Alexandra Chalupa became the driving force in pushing the collusion narrative as soon as Manafort joined the Trump campaign. The DNC paid her $412,000 from 2004 to June 2016 for consulting work, after which she left to research Manafort full time. Chalupa had Manafort in her crosshairs since 2014 when his boss, the aforementioned Yanukovych (who discovered the black ledger), had protesters gunned down in the streets during the Ukrainian Revolution. In an email in May 2016, Chapula spoke about meeting with Michael Isikoff (a Steele dossier source) and connecting him to Ukrainians – and the two met at the Ukrainian embassy soon after.

If there’s a case for collusion to be made, it’s not with Russia.