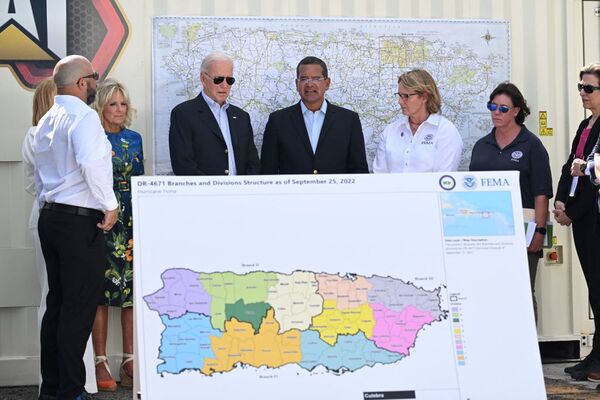 Two weeks after Hurricane Fiona, Joe Biden headed to Puerto Rico to survey the damage and pledge $60 million in federal relief for the U.S. territory that's home to 3.2 million people.

The funding will be used to strengthen flood walls, repair levees, and create a floor warning system. An estimated 109,000 homes and businesses are still out of power.

Speaking to an audience during his visit, Biden bizarrely attempted to pander by claiming that he was raised by the Puerto Rican community in Delaware. “We have a very, in relative terms, a large Puerto Rican population in Delaware relative to our population. We have the eighth largest black population of the country and between all minorities we have 20% of our state [that] is minority. And so I — I was sort of raised in the Puerto Rican community at home, politically.   And so, we — and we came here for a long time, both for business and pleasure, since you’re part of the Third Circuit Court of Appeals and Delaware is as well. ”

Like many of Biden's seemingly random claims, this too is likely false. Delaware doesn't have the same demographics today as it did when Biden was growing up. According to the 1970 U.S. Census, only 2,154 Puerto Ricans lived in Delaware that year, which accounted for only 0.39% of the state's population at the time. We do know for sure that Biden did not go to Puerto Rico as a lawyer working in the Third Circuit, because Puerto Rico falls under the jurisdiction of the First Circuit, and has since 1915.