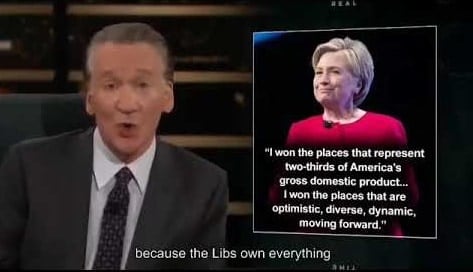 In 2013, HBO’s Bill Maher threatened to leave California over their insane taxes. “I just want to say liberals — you could actually lose me. It’s outrageous what we’re paying — over 50 percent. I’m willing to pay my share, but yeah, it’s ridiculous,” a reasonable Maher said.  Ironically, he’s now generating controversy over recent comments arguing that Republicans are secretly jealous of people who get to live in California.

“That’s why red state voters are so pissed off. They don’t hate us, they want to be us. They want to go to the party. It’s like we’re the British royal family and they’re Meghan Markle’s dad…Maybe that has something to do with why Trump voters are obsessed with ‘owning the libs.’ Because the libs own everything else,” Maher quipped. “The blue parts of America are having a big prosperity party while that big sea of red feels like their invitation got lost in the mail.” Giving an analogy that’s as smug as it is lazy, Maher concluded: “We have chef Wolfgang Puck, they have Chef Boyardee.”

If people in red states are jealous of blue states, they certainly aren’t doing much about it. The same cannot be said of the residents of blue states.

The laws of supply and demand have taken note; if you want to rent a UHaul to move, a route from California to Texas costs twice as much as the reverse.

Taxes are Largely Driving the Move, and the Economic Effects are Obvious

Maher previously expressed interest in leaving California over taxes, and he isn’t the only one. According to a study from the American Legislative Exchange Council, from 1998-2008, the nine states with no personal income tax saw their economies grow 86%, their populations grow 16%, and employment grow 18%. In stark contrast, the nine states with the highest personal income tax rates (averaging 10%) saw their economies grow 60% over the same period, while population grew 6.3%, and employment grew 8.5%. The figures for the U.S. as a whole were 66%, 10%, and 10.4%, respectively.

The same held true in the most recent 10-year timeframe the Exchange Council studied, from 2007-2017. States lacking a personal income tax outperformed in terms of employment growth and population growth, only lagging slightly in gross state product growth.

And another added bonus…

An analysis from Truth in Accounting examined the budgets of every state and discovered that in states with a Democrat Governor and state legislature, there is an average of $22,214 in unfunded debt per person. By contrast, in states with a Republican Governor and State legislature, the figure is only $1,473. In states where power is split, the average is $14,963, with the trend showing the bluer a state is, the most debt its racked up.

In other words, the Democrat-run states have fifteen times more debt.

Among the worst states are nearly all Blue – New Jersey with $67.2k in debt per citizen, Illinois with $50.4k in debt per citizen, Connecticut with $49.5k, and Massachusetts, with $32.9k. The only exception is Kentucky which has $39k in debt per citizen. All three states with greater than a $10k surplus per citizen have a Republican Governor and majority in their state legislatures. Among them are Alaska ($38.2k), North Dakota ($24k), and Wyoming ($20.5k).

What exactly is there to be jealous of?