The state is essential to Trump’s reelection, as even if he wins Pennsylvania and Georgia, he can’t afford to lose both Michigan and Wisconsin, unless Arizona ends up being decided in Trump’s favor. Fox News and the Associated Press have called Arizona for Biden, but the percent of the vote reported has turned to be less than initially reported, and many Republican leaning counties have yet to be counted.

The Trump campaign just put out a press release, with campaign manager Bill Stepien saying that “Trump’s campaign has not been provided with meaningful access to numerous counting locations to observe the opening of ballots and the counting process, as guaranteed by Michigan law. We have filed suit today in the Michigan Court of Claims to halt counting until meaningful access has been granted. We also demand to review those ballots which were opened and counted while we did not have meaningful access.” 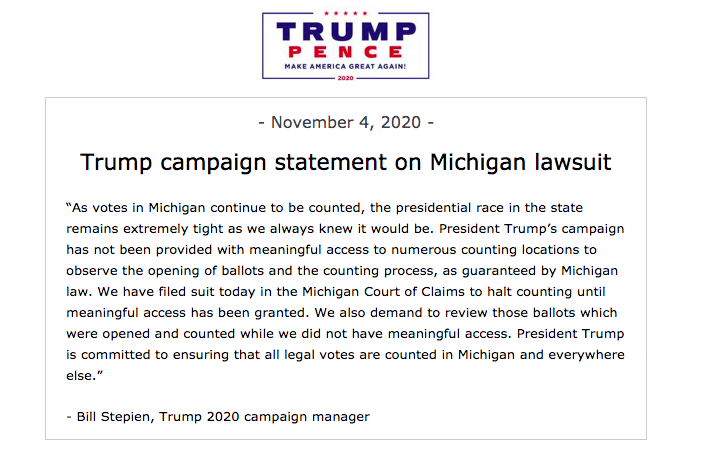 This comes after the Trump campaign said that they would be requesting a recount in Wisconsin.

This Week on Unfiltered With Dan Bongino: Your Rights Are Under Attack