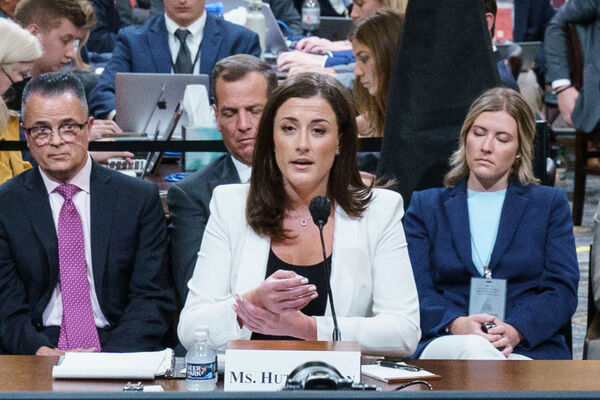 January 6th Committee Holds Surprise Hearing During Congressional Break by Pool is licensed under Getty Images North America Getty Images
Photos by Getty Images
As has seemingly been the case a near infinite amount of times already, the media assured us once again yesterday that the walls were finally closing in on Donald Trump as Cassidy Hutchinson delivered what we were told was *bombshell* testimony.

Among the *bombshell* revelations was that Trump wasn't afraid of the Jan 6 protesters (why would he have been?) and "knew they were armed." The allegation that got the most attention was when Hutchinson claimed that Trump became incensed when he wasn't allowed to go to the Capitol on January 6, and then lunged at the steering wheel of the Presidential limo, and then at the agent who grabbed him arm to try to take it off the steering wheel. It's a cartoonish picture for sure, and one there was no reason to trust in the first place.
Dan Bongino pointed out major problems with the non-bombshell on his podcast earlier today that the entire mainstream media missed. As he points out, upon departing his rally on January 6, Trump didn't get into the Presidential Limo (often called "The Beast" in the media), he got in an SUV, meaning the story can't possibly be true. Dan also pointed out that Hutchinson recalled secret service agent Tony Ornato as telling her that the "president got in The Beast," but that no Secret Service agents call the Presidential Limo that.

Watch his full analysis below (if you're familiar with the background info, skip ahead to 3:50):

According to The Blaze, reporting just hours after her testimony:
Hutchinson said that she heard from Tony Ornato, then-White House deputy chief of staff, that the former president became incensed when he wasn't allowed to go to the U.S. Capitol on Jan. 6. He is alleged to have grabbed at the steering wheel of the vehicle and then lunged at the agent who was preventing him from leaving. Later on Tuesday, that Secret Secret agent reportedly said he was willing to testify that this account was false. Ornato also indicated the same willingness to testify contrary to the story.
Other evidence presented during the hearing has been called into doubt too, such as a handwritten note Hutchinson allegedly wrote to Trump on January 6, which she testified was written by her. Liz Cheney presented the note, which read "Anyone who entered the Capitol without proper authority should leave immediately." But now a spokesman for former Trump lawyer Eric Herschmann is saying that he wrote it: "All sources with direct knowledge and law enforcement have and will confirm that it was written by Mr. Herschmann."

As the old quote goes; "A lie can travel around the world and back again while the truth is lacing up its boots" - and the January 6 committee is well aware.

Matt Palumbo is the author of The Man Behind the Curtain: Inside the Secret Network of George Soros
January 6th Committee Holds Surprise Hearing During Congressional Break by Pool is licensed under Getty Images North America Getty Images
Photos by Getty Images