Coronavirus Puts 3.3 Million Out of Work (So Far)

The unemployment benefit numbers are out, and while they aren’t pretty, the fact that the markets are still up as of writing indicates that they still weren’t quite as bad as most thought they would be. That being said, the rapid speed at which the economy shed jobs is still unprecedented in U.S. history, and represents a tragic turn as the strongest economy we’ve ever had was sabotaged by China.

According to the Washington Examiner: Workers claiming new unemployment benefits soared last week to 3.3 million, the Labor Department reported Thursday, as the coronavirus forced employers to lay off staff.

The number of new claims is the largest in the country’s history, as nearly 70,000 have been infected by the virus in the United States, according to Johns Hopkins University.

Thursday’s total easily eclipsed the previous record high of weekly jobless claims from September 1982, when 695,000 people were laid off.

New claims for unemployment had jumped by 70,000 to 281,000 the week before, but otherwise claims had hovered near historically low levels for years, as low unemployment and robust hiring made it less likely for workers to be separated.

Thursday’s spike in unemployment claims will inevitably translate into a dramatic rise in the unemployment rate. The left-leaning Economic Policy Institute had projected that between 3 and 3.4 million would claim benefits and that such an increase “would raise the unemployment rate by more than half, by 2 percentage points from 3.5% to 5.5%.”

When represented graphically, you can clearly see that there’s no historical comparison to this many jobs being lost so quickly. While unemployment would still need to increase an additional 4.7 percentage points to hit its high during the 2008-2009 financial crisis, it took nearly two years of cumulative job losses while in recession to reach that level. 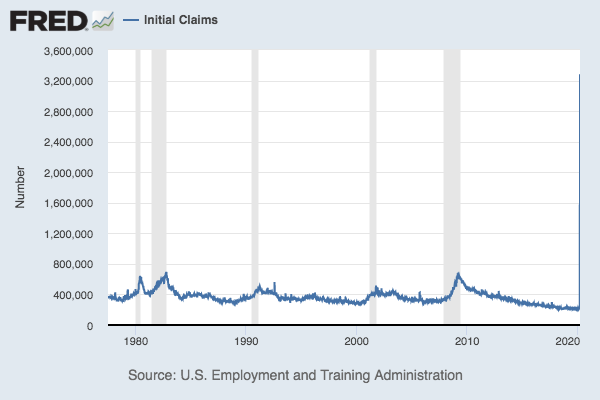 It is extremely likely that the economy is already in a recession, but not all recessions are created equal. This recession more reflects the economy being put “on hold” for a few months, and stimulus legislation being discussed aims more to act as a band aid to mend the gap as financial time is paused (as opposed to solely boosting aggregate demand). Ideally, most of the recently laid off will simply be rehired by the same companies that laid them off once we’re out of quarantine, as a large chunk of demand is simply pushed into the next quarter.

Former Federal Reserve Chairman Ben Bernanke argued as much, stating that “This is a very different animal than the Great Depression. The Great Depression, for one thing, lasted for 12 years, and it came from human problems: monetary and financial shocks that hit the system.” By contrast, he said that the coronavirus crisis is “really much closer to a major snowstorm or a natural disaster than it is to a classic 1930s-style depression,” predicting a sharp recession and quick recovery.

Economist Justin Wolfers also argued that coronavirus related job losses could be similar to those from natural disasters, and pointed out that employment tends to bounce back quickly from those kind of shocks to the economy:

Or perhaps this shock will be more like how Texas responded after Hurricane Harvey.

There, the initial shock to initial jobless claims was also large, but it receded pretty quickly.

If the U.S. follows this trajectory then the coronavirus recession will be relatively mild. pic.twitter.com/TRkxIpKd1X

Of course, this is all dependent on the length of the quarantine and how successful we are at containing the coronavirus.