Crazy Nancy to Send Impeachment Articles to Senate on Monday 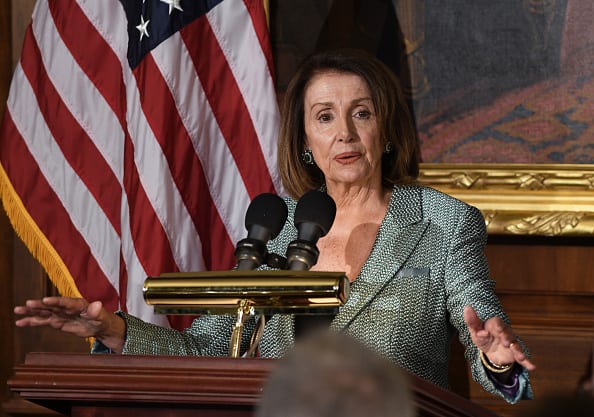 Due to her admitted fear of Donald Trump running for office in the future, (Crazy) Nancy Pelosi plans on sending the House’s articles of impeachment to the Senate on Monday.

According to Just the News:

Pelosi will send the article of impeachment on former President Trump to the Senate on Monday, Senate Democratic leader Chuck Schumer said Friday, according to multiple news reports.

The trial will be followed by a Senate trial. The Democrat-controlled House impeached Trump on a single article, related to inciting a riot, after the Jan. 6 breach of the U.S. Capitol Building following a pro-Trump rally.

“There will be a trial,” Schumer said, according to the Associated Press. “It will be a full trial, it will be a fair trial”

Democrat Senator Joe Manchin has already said that there aren’t enough votes in the Senate to convict Trump – meaning that the best Pelosi can hope for out of it is more political theater.

A two-thirds vote is needed in the Senate to convict an impeached president – or in this case, former president.

There are some legal scholars who have questioned the constitutionality of an impeachment trial for a former president. Former Fourth Circuit Judge J. Michael Luttig says that Article II Section 4 of the Constitution confirms the view that the purpose of impeachment is to remove from office a president before he can cause further harm. That article and section reads “The President, Vice President and all civil officers of the United States, shall be removed from Office on Impeachment for, and Conviction of, Treason, Bribery, or other high Crimes and Misdemeanors.”

The number of Republican senators who could potentially vote to convict has reportedly been dwindling this week, with “sources” (whoever they are) claiming that only five or six would be willing to convict. In that case Democrats would only have 55-56 votes to convict.

While Mitch McConnell seemed to welcome the trial, placing blame on President Trump for the capitol hill siege of which he’s accused of inciting, some Senate Republicans have reportedly warned him that if he votes to convict, he’ll lose their support.