Debunking Three AOC Falsehoods From This Past Week 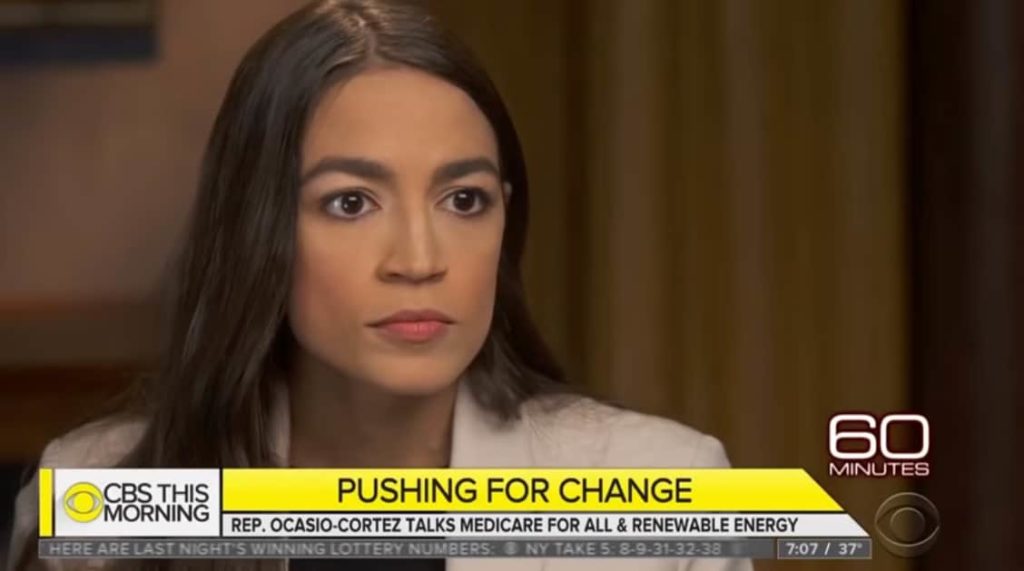 Last week the media acted in unison to pretend that there was mass right-wing outrage over the fact that democratic-socialist darling Alexandria Ocasio Cortez was featured in a dance video while attending Boston University. In reality, literally one person was outraged; some guy on Twitter with the screen name “Anonymousq1776” that posted the video.

While there certainly is dumb criticism of Cortez out there, that’s true of every politician. Irresponsibly, however, the media seems intent on pretending every criticism of Cortez is equally hysterical to the non-existent dance controversy. In reality, there is no shortage of legitimate reasons to criticize the new Congresswoman.

Back in July I critiqued four ideas or statements of Cortez’s – and now that’s she holding office, here are three more from the past week you may have missed.

Previously unable to answer the question of how she wants to fund the various freebies she wants to implement, Cortez finally has an answer: taxing the rich 70%. Speaking to 60 Minutes, she pointed out that such rates aren’t as scary as they sound, because after all, we had them back in the 1960s and the economy was doing fine then. As she stated, “You look at our tax rates back in the 60s, and when you have a progressive tax rate system, your tax rate, let’s say, from $0 to $75,000 maybe 10% or 15%, etc. But once you get to the tippy tops, on your 10-millionth dollar, sometimes you see tax rates as high as 60% or 70%.”

And while we did have top tax rates exceeding 70% in the past – nobody paid to those rates. As I explained in an article last year:

And all this overlooks the fact that a 70% top tax rate wouldn’t even raise close to enough tax revenue to fund the programs Cortez wants, which would require expenditures amounting to roughly 20% of GDP. If we could tax all income above $1 million at 100% (assuming everyone continues working the same amount), it would raise “only” 3.8% of GDP.

As the government shutdown entered its 18th day, Cortez posted an obviously fake conversation that supposedly had just transpired in her office. I was a little surprised it didn’t end with something along the lines of “and then everybody clapped!”

I just had a furloughed worker come visit me in my office.

“I work for HUD,” he said. “My family is hurting now that I’m three weeks without a paycheck,”

“but please – please don’t give into a wall. I don’t want the political tool of withholding my paycheck to be legitimized.”

Mockery aside, we know that this conversation occurred nowhere outside Ms. Cortez’s head because, as The Federalist’s Gabriel Malor pointed out, HUD employees were last paid on December 28th, and their next payday is on January 11th.

On the other hand, maybe this HUD worker simply forgot that he gets paid bi-weekly (just kidding, of course).

Cortez isn’t happy that the Washington Post fact-checked her claim that the Pentagon had wasted over $21 trillion dollars – which is a greater figure than the cumulative defense budget since the founding of our Republic. Cortez was making this claim as an idea to fund the estimated $32 trillion price tag that single-payer health care would cost (though it should be noted that the “$32 trillion” figure assumes an immediate 40% cut in payments to doctors, hospitals, and drug companies, so take even that enormous figure with a pound of salt).

Speaking to 60 Minutes about the falsehood, she told Anderson Cooper “And whenever I make a mistake. I say, ‘Okay, this was clumsy,’ and then I restate what my point was. But it’s — it’s not the same thing as — as the president lying about immigrants. It’s not the same thing at all.” She’s never actually done that, and she’s minimizing her own falsehoods. Again, rather than acknowledge the falsehoods in her impossible claim, she then went on Twitter to blast the Washington Post for not doing more to fact check Donald Trump. Her issue mainly seemed to be that she was awarded “Four Pinocchios” by the Post for her claim, which indicates a complete falsehood. Her logic seems to be that since her falsehood was unintentional, it shouldn’t count as much as other people’s falsehoods, such as Donald Trump (because even when she’s caught lying, this is somehow a point against Trump).

Thank you for sharing @washingtonpost’s rubric!

Except the standard for “4 Pinocchios” just says: “Whoppers.”

That’s it. “Whoppers.” As an official fact checking standard.

Cheeky, but really not okay to be held to a jokey standard when 45 is advancing conspiracy theories. https://t.co/eNw4e8jhIu

As the Post’s fact-checker Glenn Kessler quickly pointed out, the Post holds Trump’s feet to the fire every single day. In fact, for every one claim of Cortez’s they’ve fact-checked, they’ve also fact-checked over 3,800 Trump claims.

I will note that most of those Trump “lies” are essentially the Post fact-checking hyperbole. Regardless, Cortez doesn’t seem to have a problem with the fact-checkers when they nitpick Trump, but she does when they expose her outright lies. Go figure.