In August of last year, former Deputy FBI Director Andy McCabe sued the Trump administration for what he called an “unlawful” termination.

Whatever case he thought he had then has been obliterated by recent developments, including the IG report and the DOJ admitting that two of the warrants used to surveil Carter Page were unlawful. One of the invalid applications, dated April 7, 2017 was signed by disgraced former FBI Director James Comey. The other, dated June 29, 2017 was signed by McCabe and former deputy attorney general Rod Rosenstein.

Even McCabe was forced to admit following the release of the IG report that the FBI suffered from an “inherent weakness in the process” of obtaining FISA warrants. The IG report’s language was a tad harsher – accusing McCabe of “lacking candor.”

Documents released earlier in the month indicated that the DOJ is considering prosecuting McCabe over leaks he made to the media. We’ll have to wait and see if they move forward with that – but the DOJ has responded to McCabe’s lawsuit in an amusing fashion, and it’s bad news for him.

“Undercover Huber” has the scoop:

—Not yet indicted for lying

Needless to say, the DOJ wasn’t impressed. “[The] Plaintiff’s tour of duty argument is flawed: An FBI Agent’s day does not stop at 5 p.m., even on a Friday.” 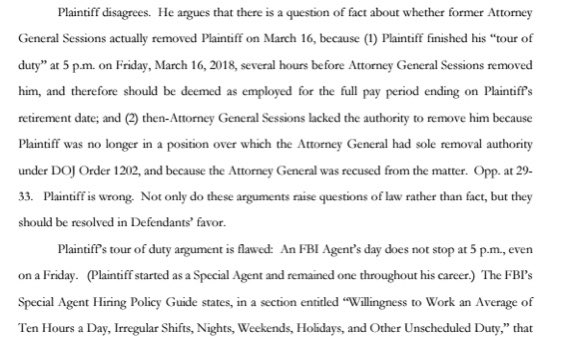 The DOJ then cited the FBI’s handbook that proves as much.

The DOJ also informs McCabe’s lawyers that no “alleged discovery [will] vindicate [the] Plaintiff’s startling submission that, contrary to the FBI’s Special Agent Hiring Policy Guide, its website, and common sense, an FBI Special Agent’s work day ends at 5 p.m.”

In response to claims from McCabe’s lawyers that they didn’t get enough time to argue their case, the DOJ pointed out that the Constitution says otherwise.

The DOJ also dismisses McCabe’s conspiracy that President Trump ordered his firing, and references the IG report’s determination that McCabe lacked candor and made unauthorized disclosures.

In conclusion, the DOJ states “For the reasons stated above, and in Defendants’ opening brief, the Court should dismiss Plaintiff’s Complaint, or enter summary judgement in favor of Defendants.”

For once, sanity may prevail.

Ep. 1166 The Real Scandal Behind the Impeachment Sham
VA Bill Would Criminalize Criticism of Governor and Associates
Advertisement

This website uses cookies so that we can provide you with the best user experience possible. Cookie information is stored in your browser and performs functions such as recognising you when you return to our website and helping our team to understand which sections of the website you find most interesting and useful.

Strictly Necessary Cookie should be enabled at all times so that we can save your preferences for cookie settings.

If you disable this cookie, we will not be able to save your preferences. This means that every time you visit this website you will need to enable or disable cookies again.