Dr. Fauci and His Wife's Wealth Grew By $5 Million During COVID Pandemic 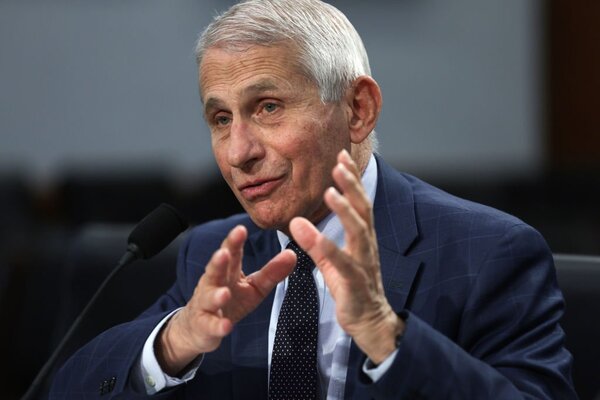 Ep. 1781 Fauci Exposes The Whole Scam In This Video by Team Bongino is licensed under N/A N/A
Photos by Getty Images
Among the big winners from the COVID pandemic has been none other than Dr. Anthony Fauci himself.

Fauci and his wife saw their net worths expand from a combined $7.5 million in 2019 to $12.6 million by the end of 2021, with the rise in income coming from investment gains, awards, royalties, and his $400k+ salary that makes him America's highest paid federal employee.

According to Fox News, the watchdog group OpenTheBooks told them that "While Dr. Fauci has been a government bureaucrat for more than 55 years, his household net worth skyrocketed during the pandemic. Fauci's soaring net worth was based on career-end salary spiking, lucrative cash prizes awarded by non-profit organizations around the world and an ever-larger investment portfolio. Despite becoming a figure of controversy, the system has rewarded Dr. Fauci handsomely. For example, he is the top-paid federal employee, his first-year golden parachute retirement pension is the largest in federal history, and he's accepting $1 million prizes from foreign non-profits."

The $1 million was an award from the Dan David Foundation for "speaking truth to power," "defending science," and advocating for the COVID vaccine.

During a Congressional hearing last month, Senator Rand Paul grilled Fauci on the questions surrounding where he gets his royalties from. "We’ve been asking you and you refuse to answer whether anybody on the vaccine committees gets royalties from the pharmaceutical companies. I asked you last time and what was your response? ‘We don’t have to tell you,’" Paul said. "When we get in charge, we're gonna change the rules and you will have to divulge where you get your royalties from, from what companies and if anybody on the committee has a conflict of interest, we are going to learn about it. I promise you that."

In a prior hearing in June, Paul revealed that from 2010-2016, 27,000 royalty payments totaling over $193 million was given to 18,000 NIH employees, which was only discovered when Fauci was forced to disclose that due to a Freedom of Information Act request.

Even in retirement Fauci will continue enriching himself, and is set to receive the biggest federal retirement package in U.S. history.

Ep. 1781 Fauci Exposes The Whole Scam In This Video by Team Bongino is licensed under N/A N/A
Photos by Getty Images