Facebook is making an effort to fact check fake news on their platform, and it’s proving to be a trojan horse to justify silencing conservative voices.

While no one is against fact checking misinformation, there is unfortunately a subjective nature when it comes to fact checking certain political statements. It’s not like we’re fact checking someone who claimed that 2+2=5, a statement that can be objectively disproven. Statements in politics can be true or untrue depending on what the person implied by it. For example, if someone were to claim that women earn 77 cents for every dollar a man earns the statement would be technically true – but if they were using it to prove discrimination, it would be false because of the actual variables responsible for the gap.

Don’t expect Facebook’s fact checkers to take that kind of nuance into account, especially when they’ve enlisted PolitiFact as their partner in combating what they want to be fake news. Politifact’s obvious left wing-bias is something I’ve documented elsewhere *here* and *here.* Just to give a single glaring example of their bias, they’ve often rated near-identical statements differently depending on the ideology of the person making it – as you can see below:

The “Dan Bongino” Facebook page has recently been a target of Politifact bias, enabling Facebook to justify throttling our traffic.

One of their recent attempted “fact checks” was of an article I wrote and posted to the Facebook page titled “Violent Crime in South Bend Doubled During Mayor Pete’s Tenure.” I pointed out that violent crime had effectively doubled under Mayor Pete’s tenure, though I made note that because violent crime dipped the first year he was in office, the trough-to-peak was slightly exaggerated, so I clarified that there was roughly a 75% increase in crime by that metric. Either way the picture is painted, it doesn’t look great for Buttigieg. 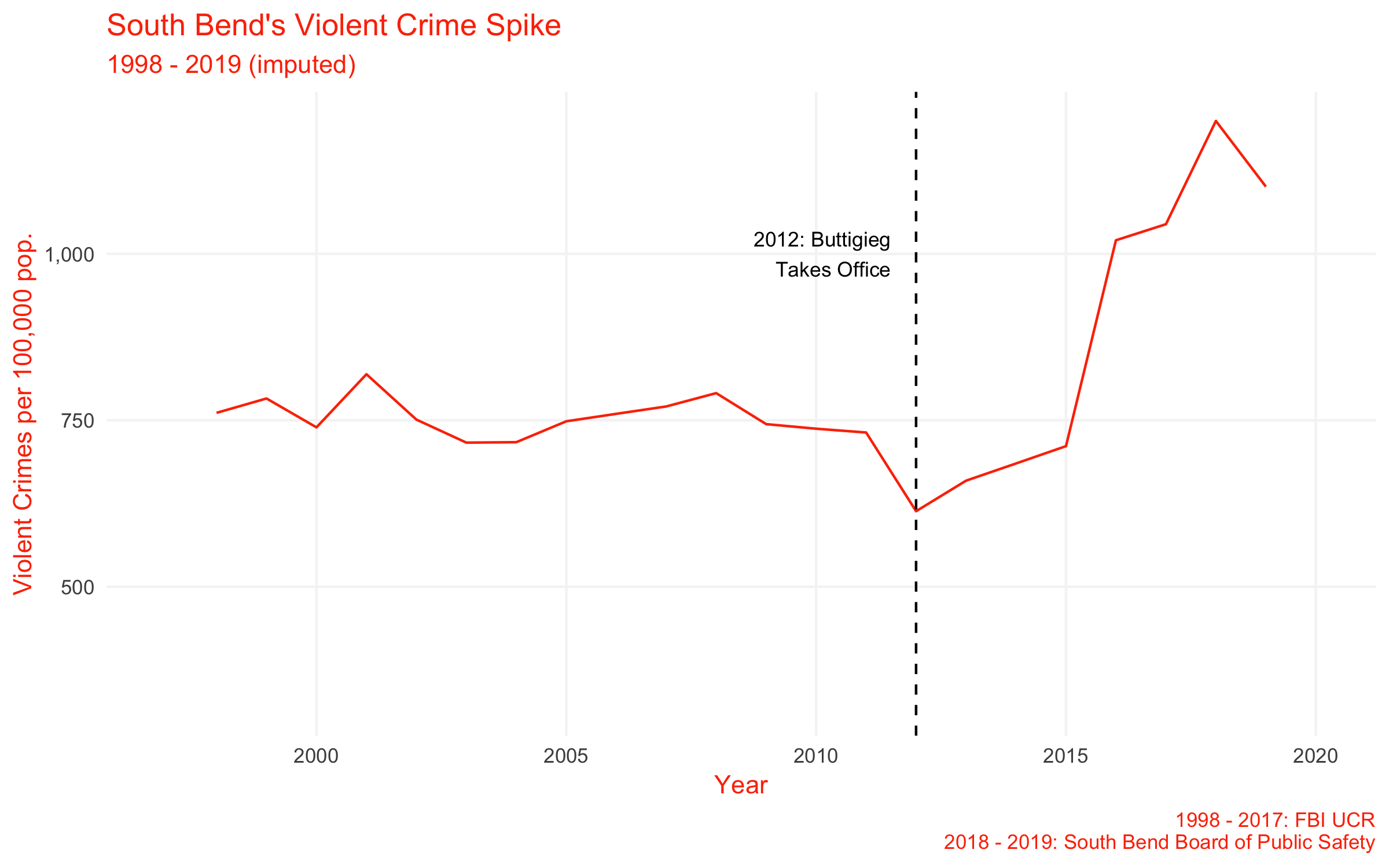 Regardless, we were given a warning and notification informing us that Politifact had rated the claim “mostly false,” even though the actual fact check agrees with my overall claim.

So what was wrong with my claim?

Politifact’s Tom Kertscher, a fact checker that’s godawful at fact checking, pointed out that South Bend changed the way that police counted assaults by including cases “where a weapon was shown” as aggregated assaults.

Kertscher then does no actual work to quantify the extent to which this influences the numbers, he just says that the numbers then get tricky. That’s it.

Amusingly, at one point Kerstscher writes that my statistics “appear to be backed up with the gold standard of violent crime statistics — the FBI’s Uniform Crime Report.” Maybe that’s because they are? If a fact checker is going to call someone’s statistics into question, would it kill them to provide alternative statistics instead of saying “yours are wrong, but I don’t exactly know by how much because I can’t do math”?

Also demonstrating Kerstescher’s incompetence as a fact checker, he thought the article was written by Dan Bongino, even though my name is on the article right under the headline he’s fixated on.

So, Kerstscher couldn’t disprove the claim, nor could he even get my name right, but Facebook still used his fact check to justify throttling our traffic. It’s notable that Facebook would single out one of our articles criticizing Buttigieg for fact checking considering that Buttigieg is a friend of Zuckerberg, and was one of the first 300 people to ever make an account on the platform. I’m sure that’s just a coincidence.

That’s hardly the only time that Facebook dinged us for making a true claim.

Among the most ridiculous cases where one of our posts was branded false was one headlined “Pelosi Admits Dems Have Been Trying to Impeach Trump for the Last ‘Two and a Half Years.’” We quote Pelosi directly, and even include video of her saying as much, but apparently because she hasn’t literally been carrying out an impeachment process for the past two and a half years our claim was false. This one at least wasn’t the result of a PolitiFact “fact check,” and was ridiculous enough we were able to appeal to Facebook to reverse the warning we received as a result of posting something that was audibly and visibly true.

If you really want a taste of PolitiFact’s fact-checking skills, they once rated Obama’s promise that you can “keep your healthcare plan” if you like it as true, before later rating it the lie of the year a half-decade later.

And that’s hardly their only “fact check” in need of a revision.