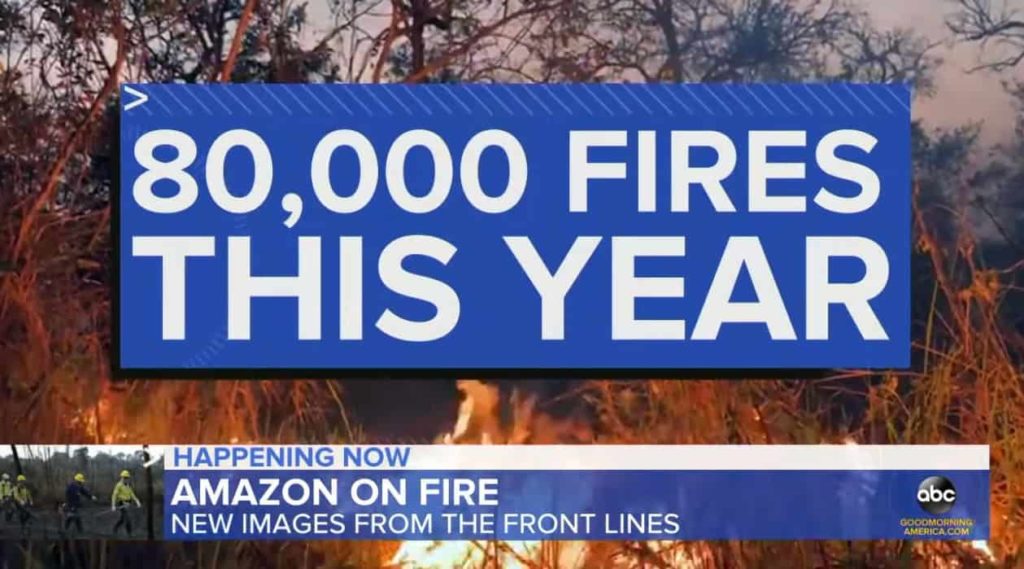 The Amazon rainforest has been on fire for three weeks, prompting outrage and calls for action from celebrities, pundits, and lawmakers.

At face value the statistics look staggering – that there were more than 80,000 fires so far this year, the highest since 2013, and up 79% increase from the same time period last year.

At least, that’s the narrative at face value.

The Amazon is Burning – These Places Are Not

A tweet from French President Emmanuel Macron claiming to visualize the destruction has over 60k retweets and 160k likes on Twitter as of writing – and in reality this is a twenty-year-old photograph.

Our house is burning. Literally. The Amazon rain forest – the lungs which produces 20% of our planet’s oxygen – is on fire. It is an international crisis. Members of the G7 Summit, let's discuss this emergency first order in two days! #ActForTheAmazon pic.twitter.com/dogOJj9big

Footballer Cristiano Ronaldo asked his followers to pray for the Amazon – accompanied by a photograph of a fire in Southern Brazil from 2013.

The Amazon Rainforest produces more than 20% of the world’s oxygen and its been burning for the past 3 weeks. It’s our responsibility to help to save our planet. #prayforamazonia pic.twitter.com/83bNL5a37Q

And of their shared claim that the Amazon makes up 20% of the Earth’s oxygen, according to Dan Nepstad, an expert on the Amazon, is all “b.s.” (his word choice). “There’s no science behind that. The Amazon produces a lot of oxygen but it uses the same amount of oxygen through respiration so it’s a wash.”

While I realize I’m providing only two examples here, that’s for the sake of space. Others who shared misleading photographs included Leonardo DiCaprio, Madonna, Jaden Smith, Logan Paul (Youtuber), and many others.

For The Most Part, The Amazon Isn’t Burning – Farmland is

Surprisingly the New York Times provided a much needed reality check on the issue. “Natural fires in the Amazon are rare, and the majority of these fires were set by farmers preparing Amazon-adjacent farmland for next year’s crops and pasture,” they clarified. “Much of the land that is burning was not old-growth rain forest, but land that had already been cleared of trees and set for agricultural use.”

The Times also acknowledges that “These fires were not caused by climate change. They were, by and large, set by humans.” Of course, they have to throw in a caveat, that “However, climate change can make fires worse.”

Fires Are No More Common Than Prior Years

Are the fires of epidemic proportion? You can give that impression by which year you choose as your base year to compare to today. The Times notes that the National Institute for Space Research’s “figures represent a 79 percent increase in fires from the same period in 2018.” Yet if we measure from 2016, annual fires are roughly flat.

And if we measure against past decades, there’s no clear increase in trend. In fact, if we were to pick most random years in the 2000s as our base year, we could claim a staggering reduction in forest fires. If we pick 2005, there’s been a 43% decline on forest fires in Brazil from January to August.

Any destruction of the Amazon is a tragedy – but there is nothing to support the sudden apocalyptic narrative being foisted upon the public.