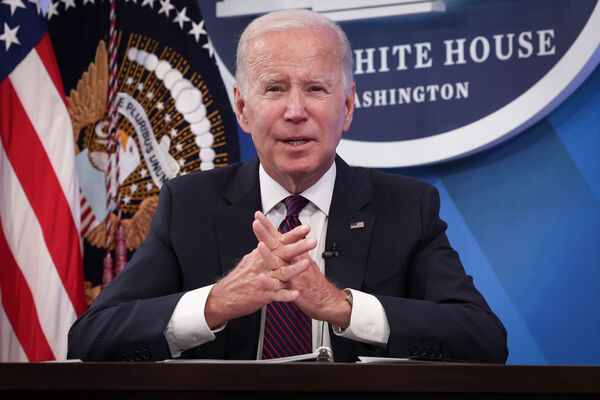 President Biden Delivers Remarks On The American Rescue Plan by Win McNamee is licensed under Getty Images North America Getty Images
Photos by Getty Images
After suspicious leaks were reported in two Russian gas pipelines, Nord Stream 1 and 2, officials in Denmark, Germany, and Poland sounded the alarm that sabotage was the likely culprit.

But who was responsible?

Former Polish Defense minister (and current member of European Parliament) Radek Sikorski, took to Twitter to hint that the United States was responsible, tweeting out a photo of the sabotaged pipeline with the caption “Thank you, USA.”

While any involvement from the Biden administration is pure speculation at this point, it wouldn’t be out of character considering their public statements.

Biden pledged in February that he’d prevent Nord Stream 2 from becoming operational in the event of a Russian invasion of Ukraine. "If Russia invades,” said Biden, “then there will be no longer a Nord Stream 2. We will bring an end to it." When asked by a reporter how he’d do that considering it’s in German control, he added "I promise you, we will be able to do that."

Tucker Carlson furthered the case of potential Biden admin involvement on his show last night, noting of Biden's language; "Notice how he phrased that. He didn't say, 'I will pause the delivery of gas from Russia to Germany.' He said there won't be a Nord Stream 2. We'll put an end to it. We'll take it out. We'll blow it up."

Tucker also pointed out that Biden isn't even the only person in his administration to share this kind of rhetoric, citing comments from State Department official Victoria Nuland, who said in January that the pipeline would "not move forward" if Russia invaded Ukraine "one way or another."

If the Biden administration is indeed responsible, it'll at least be somewhat amusing being lectured about climate change by people who comitted an act of environmental terrorism.