While registered (and self-identified) Democrats outnumber Republicans in America, the right is outnumbering the left when measured by ideology.

In a country that includes independents, RINOs, conservative Democrats, libertarians, greens, and much more, party affiliation is only one measure of the nation’s overall ideology. And in a two-party system like ours, it’s hardly the best measure. Surprisingly, Alexandria Ocasio-Cortez actually articulated that point well recently when she observed how absurd it was that herself and Joe Biden are in the same political party considering that she’s a socialist and he’s a capitalist.

AOC was critical of her more conservative party members – but unfortunately for her, the center-right still dominates the electorate. According to the latest Gallup poll, even as America has become more liberal, it has remained a center-right nation:

In 2019, the ideological balance of the country remained center-right, with 37% of Americans, on average, identifying as conservative during the year, 35% as moderate and 24% as liberal.

Conservatives and moderates remain closely matched in U.S. ideological preferences, as they have been since 2015. This follows several years — from 2009 to 2014 — when conservatives consistently outnumbered moderates. Before that, from 1999 to 2008, the two groups were about even, whereas from 1992 to 1998, moderates generally had the slight edge.

Meanwhile, liberal identification has gradually expanded over the past two decades, rising from 16% in 1996 to 19% by the late 1990s, 20% during George W. Bush’s presidency, an average 23% during Barack Obama’s presidency and 25% since Donald Trump took office. 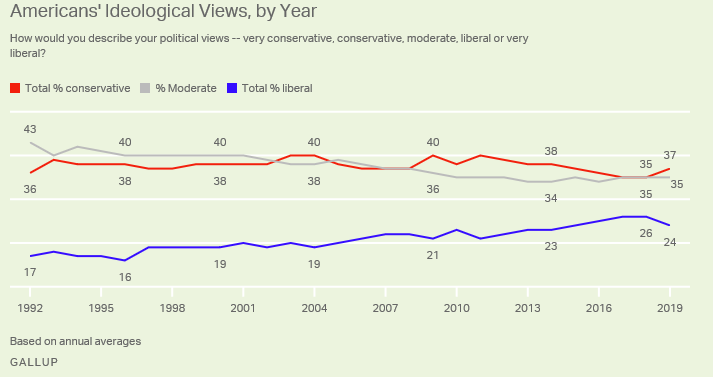 Almost no Republicans identified as liberals (only 4%), though 14% of Democrats identify as conservative. At their respective peaks (since 1994) the figures were 8% and 26%. The Democrat Party was practically a centrist party in the early 1990s, with almost the same number of constituents identifying as conservative and liberal alongside a plurality of independents. 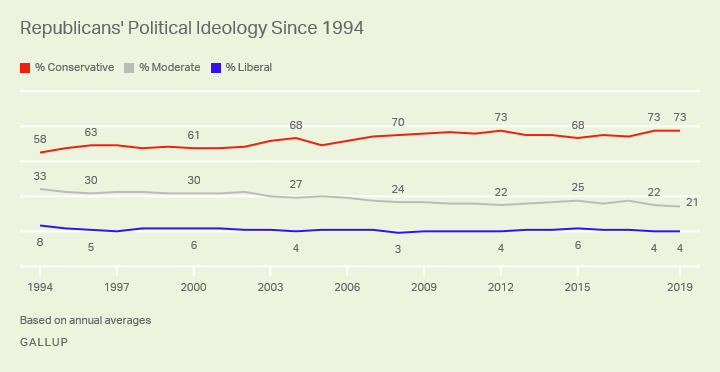 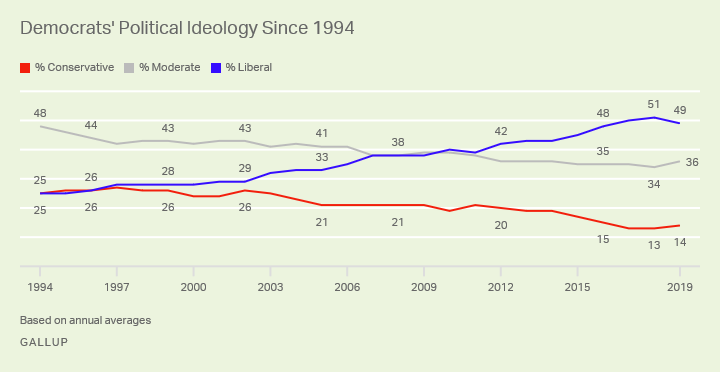 While those with views like AOC are still a minority among Democrats, they’re views with an irrationally disproportionate influence on the Party, and an increasing one at that.

Thirty years ago a center-right person may have been a member of their party. Now it’s becoming the party of socialism.