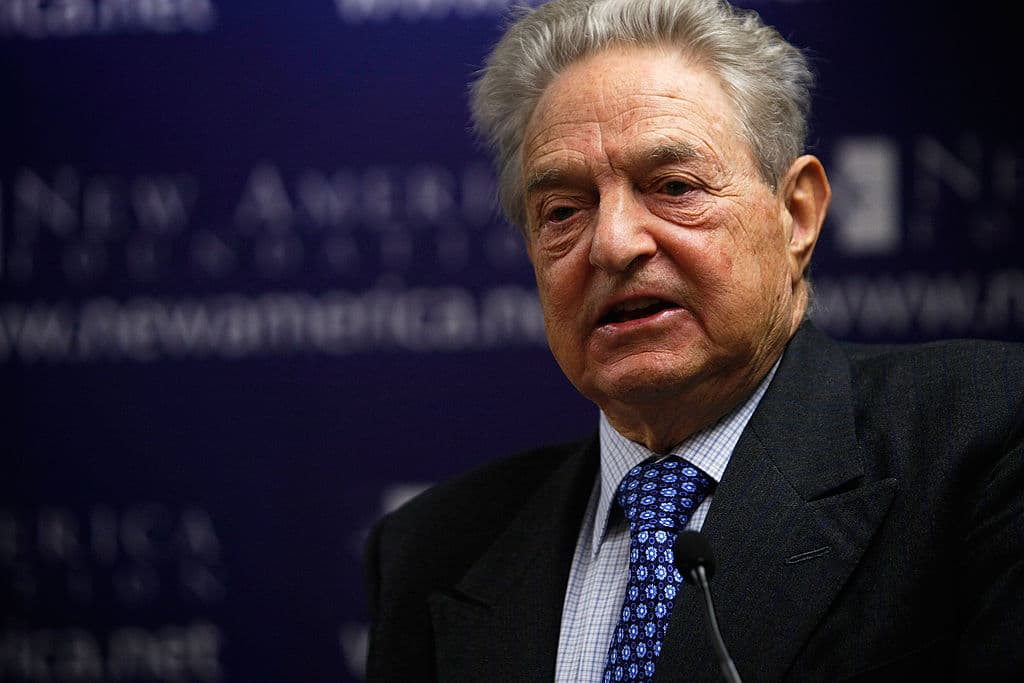 George Soros has joined the chorus correctly speaking out against Russian aggression against Ukraine, but he’s no humanitarian here.

I have witnessed Ukraine transform from a collapsing part of the Soviet Union to a liberal democracy and an open society. It has faced countless acts of Russian aggression, but has persisted.

Allowing Putin to succeed on his quest will send a message across the world that nations can simply be created or dissolved by brute force. We must #StandWithUkraine, as they stand for us.

As is always the case with Soros, his advertised motives conflict with his true self-serving motives.

He made headlines last August for speaking out the threat from China’s dictator Xi Jinping – but didn’t have a problem investing $24 million in China in November 2016 (Xi has been President since 2013). It was only since Xi has targeted individual companies that Soros is personally invested in (in this case, Alibaba and DiDi) that Soros saw fit to speak out.

The same is the case here. Ukraine just so happens to be a country where Soros has historically wielded the most influence. Contrary to some claims, there’s no ties between Soros and Ukraine’s current president Volodymyr Zelensky (Soros actually backed former President Petro Poroshenko, who Zelensky defeated in 2019), but Soros hasn’t given up on trying to retain and expand his influence over the nation.

As I wrote in my book The Man Behind the Curtain: Inside the Secret Network of George Soros:

Internationally, George Soros boasts more influence in Ukraine than he does in any other country.

The Russian-language Ukrainian newspaper Vesti publishes a list of the most influential one hundred people in the country at the end of every year, choosing Soros in 2019 as second to only President Volodymyr Zelensky. The prime minister took third place after Soros.

“Through the organizations financed by him, Soros can influence economic and political life in all of Ukraine,” the Kyiv-based paper notes.

Soros’s influence in Ukraine kicked off in 1989, two years before the collapse of the USSR, when he was creating a series of NGOs.

The most notable was in April 1990, when the International Renaissance Foundation (IRF), a part of the Open Society Foundations’ international network, was established in Kyiv. Ukraine was still a struggling part of the Soviet Union at the time. Soros’s influence would only grow in 1991 onwards when the country became fully independent. The IRF was disconnected from reality and worked only with the “NGO-cracy,” whose leaders were busy networking with Western embassies rather than engaging with citizens. Detractors rebuked the narrow patronage network of NGOs where leadership used access to domestic policymakers and Western donors to influence public policies, yet were out of touch with the public at large.

The IRF became the biggest international donor to Ukraine by 1994 with an annual budget of $12 million, which it claims was for “projects that ranged from retraining tens of thousands of decommissioned soldiers to the creation of a contemporary arts center in Kyiv” named the Soros Center for Contemporary Arts. Today, its aid to Ukraine totals $7.8 million, with a reported spending breakdown of 42 percent going toward “Democratic practice and human rights,” 24 percent to “health and rights” 15 percent to “justice system reforms,” and the rest split between “economic governance and advancement,” “education,” and “equity and antidiscrimination.”

In addition to Soros’s early endeavors in the country as the USSR collapsed, he financed Mikheil Saakashvili, the president of Georgia (2004–2013), who became governor of Ukraine’s Odessa region (2015–2016), and Svitlana Zalishchuk, a former member of Ukrainian parliament. He’s also given money to Mustafa Nayyem, an MP who was appointed VP of Ukroboronprom, a state association of the nation’s major defense conglomerates.

In 2015, then-President Petro Poroshenko awarded Soros the Order of Liberty, one of Ukraine’s highest awards. Poroshenko said of Soros upon giving him the award: “Your intense activities during recent years have extremely promoted the democratic change that we now have happening in Ukraine.” He praised Soros’s role in the country and the IRF’s contributions to the establishment of a new Eurocentric Ukraine over the preceding twenty-five years.

The presidential decree commended Soros for working toward “the strengthening of the international authority of the Ukrainian state” and the “implementation of socio-economic reforms.” This behavior could also roughly translate to “Thank you for making me president.”

Soros had Poroshenko’s ear; it made headlines that the two had met earlier in January of that year to discuss the European Union contributing to Ukraine’s development and the prospect of increased economic assistance to the country. “Ukraine is struggling to protect not only itself, but also Europe. Thus, Europe should help Ukraine implement reforms necessary for the country,” Soros belabored, urging that the implementation of such reforms required financial assistance. By March, Soros announced his intent to invest $1 billion into Ukraine. The following year, he joined Ukraine’s National Investment Council.

Somehow, Soros forgot to mention any of that.