Gun sales have surged in 2020, fueled by a pandemic, nationwide riots that Democrat leaders showed little interest in stopping, and, even prior to election day, the mere prospect of a Biden/Harris administration that would implement new gun control measures.

Americans have purchased more guns in the first eight months in 2020 than the entirety of 2019, and are on pace to make this year the biggest year for gun sales ever. Firearms seller Vista Outdoor has a backlog of over $1 billion in ammo purchases alone.

These sales don’t reflect existing gun owners hoarding firearms either, as there are over five million new gun owners this year, likely the largest surge in gun ownership in U.S. history.

Naturally, that surge in gun sales and ownership has coincided with the popularity of gun control plummeting.

According to the latest polling from Gallup:

Americans are less likely than they have been since 2016 to call for increased gun control. The latest majority (57%) in the U.S. who call for stricter laws covering the sale of firearms marks a seven-percentage-point decline since last year. At the same time, 34% of U.S. adults prefer that gun laws be kept as they are now, while 9% would like them to be less strict.

Gallup has been tracking the public’s views on this measure since 1990, when a record-high 78% of Americans supported stricter laws for gun sales as the nation’s crime rate was rising. A majority of Americans held that position until 2008. Support then fell to a low of 43% in 2011.

Since the early 1990s, Americans’ preferences for tougher gun control have generally peaked in the wake of prominent mass shootings and waned as the memory of each fades. 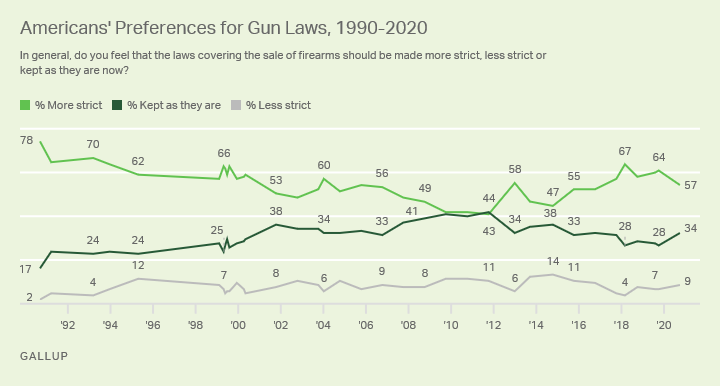 Broken down by party affiliation, support for stricter gun control has increased 24 points for Democrats since Gallup began tracking it, while it’s only increased 5 points among Independents. Meanwhile support among Republicans has been cut in half. 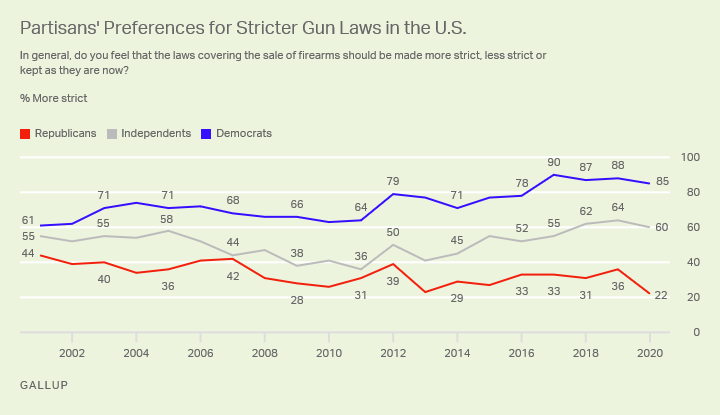 The type of gun control that’s being supported tends to be of “scary” weapons, such as so-called assault weapons, whose only differences with regular firearms are cosmetic. It would be amusing to ask someone describing the AR-15 as a “weapon of war” if they could name a single military engagement in which one was used (hint: there aren’t any).

Support for a blanket handgun ban is at the lowest level ever except for one year, and has consistently trended downward. 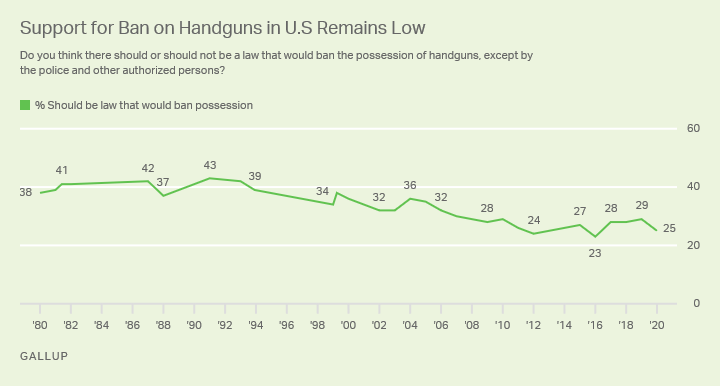 Ironically, it’s handguns that make up the disproportionate share of firearm homicides in the U.S., not the “scary” firearms people want to regulate. There were four times as many people are killed with knives that all types of rifles (not just “assault” rifles) last year. That support for gun control is disproportionately in favor of restricting “assault rifles” just goes to prove that what support there is for gun control is being driven by media hysteria, not the facts.