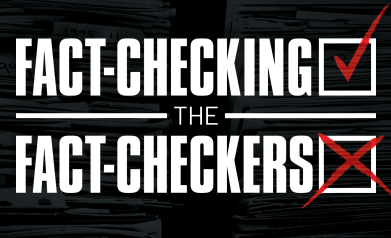 For years the so-called “fact checkers” and their unwavering commitment to distorting the facts have been on my radar.

While I've been criticising them for years, in the past year specifically, mostly out of frustration from seeing the most incompetent people in politics be heralded as truth-tellers, I began making an effort to actively document every example of fact-checker incompetence I could find to eventually present and expose comprehensively in a book that is now available for pre-order (on Amazon, Simon and Shuster, and Barnes & Noble). My goal with the book is two-fold: to expose who the main fact-checkers are, how their purpose is to censor right-wing narratives and uphold the dominant liberal or media narrative, and then create a directory of their most embarrassing errors and other acts of incompetence you wouldn't expect from people who get to be the "final say" on reality.

In the end, I ended up with over 100,000 words worth of examples of fact-checkers flubbing the facts, often predictably so - here are just three of the most amusing:

Not All—Just Most: The Case of Democrat Control of America’s Most Violent Cities

The Washington Post’s Philip Bump decided to try to fact-check a statement from Donald Trump that “you hear about certain places like Chicago and you hear about what’s going on in Detroit and other—other cities, all Democrat run. Every one of them is Democrat run. Twenty out of 20. The 20 worst, the 20 most dangerous are Democrat run.”

Bump responded with two charts, with one showing overall violent crimes in America’s 20 most dangerous cities, and pointed out that two of them are run by Independents and one is run by a Republican. 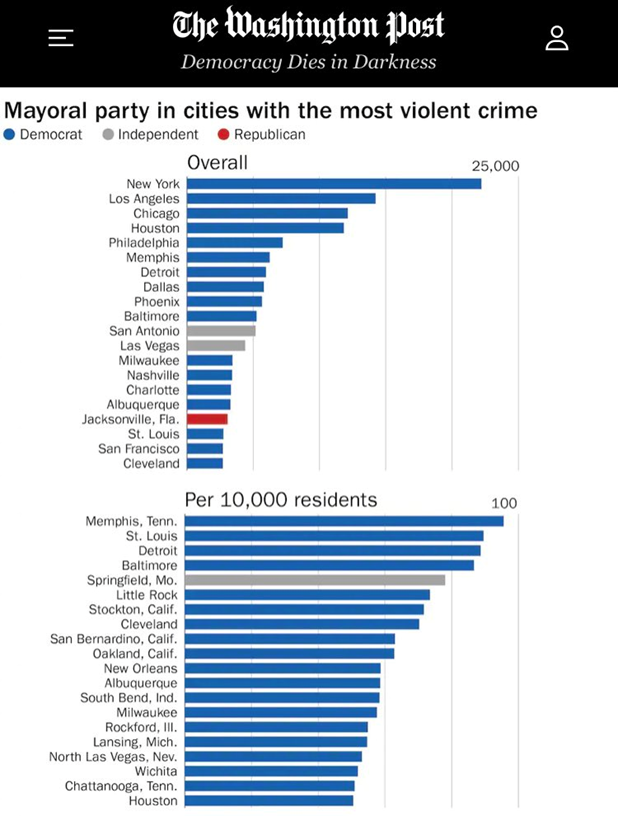 Those figures are useless however, as crime figures have to be adjusted for population. In a second chart (pictured directly above), Bump’s own data shows that on a per capita basis, none of the twenty most violent cities were run by Republicans (and nineteen, or 95 percent, are run by Democrats).

It also must be noted that there was a zero percent chance that the Mayors of Springfield, Missouri, or San Antonio, Texas, were going to be a Republican or Democrat because both cities have nonpartisan mayoral elections. Despite that, the Post article is titled, “Trump keeps claiming that the most dangerous cities in America are all run by Democrats. They aren’t.” But in 100% of cities with partisan Mayors, they are.

In anticipation of the quarterly GDP figures being released in July 2022, the Biden administration launched a mini-campaign to obfuscate what exactly a recession even is.

Conventionally, when there are two consecutive negative quarters of economic growth, the economy is in a “technical recession.” This definition is widely used outside the U.S. as well, with the U.K.’s central bank, France’s national statistics bureau, Germany’s central bank, and Canada’s Federal Balanced Budget Act defining it as such, and Australia’s parliament using it as an official definition of a recession.

The fact-checkers sided with Team Biden on this one - but there was no ambiguity whatsoever among them as to what a recession as prior to the Biden administration redefining it.

PolitiFact’s Louis Jacobson wrote an “explainer”-style article on what a recession is to defend the White House spin, where he wrote that defining a recession was a “confusing topic,” and that the “two-quarter rule is an informal metric.” In 2015, Jacobson wrote that Donald Trump was wrong to suggest that a negative quarter of GDP growth under Obama suggested the U.S. economy was in recession because “the general rule of thumb is that it takes two quarters of negative growth to signal a recession.”

In 2015, the Washington Post’s Kessler fact-checked the same Donald Trump quote that Jacobson did, which he determined to be false because “after all, two negative quarters in a row is a standard indicator for an economic recession.”

CNN’s fact-checker Daniel Dale, who was also fact-checking a similar Trump claim about the Obama economy, said, “There was no recession in the late Obama term. The economy was growing though growth had slowed in 2016, to 1.7%, there were no quarters of negative growth in 2016. You need two straight for a recession.”

The justification for the “false” rating was that one largely uninhabited barrier island with fewer than two dozen residencies named Cayo Costa, which is inside Lee County, falls inside the storm’s path. If we were to assume an average 3 people per residence on Cayo Costa, the island’s population would account for roughly 0.008% of the population of Lee County (760,822) as of the 2020 Census.

But even that would be an overestimate, as Governor DeSantis' Press Secretary also pointed out that the island was completely uninhabited at the time.

The population of Cayo Costa is not mentioned at any time by Reyes.

Those are just three examples - for hundreds more, be sure to pre-order the book!