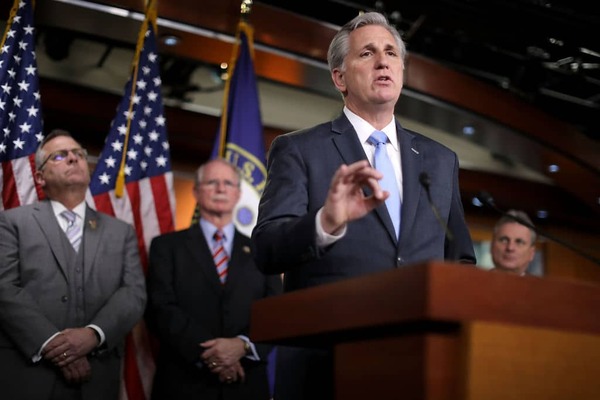 Rep. Matt Gaetz confirmed that he won't be voting for Kevin McCarthy for speaker.

Speaking to Charlie Kirk yesterday, Gaetz revealed that he and four other Republicans would try to block McCarthy in the leadership race, telling Kirk "I'm not voting for Kevin McCarthy. I'm not voting for him tomorrow. I'm not voting for him on the floor. And I am certain that there is a critical mass of people who hold my precise view. And so the sooner we can sort of dispense with the notion that Kevin is going to be speaker, then we can get to the important work.”

Elsewhere Gaetz claimed “What I can tell you as I stand here right now is that Kevin McCarthy does not have 218 votes to become speaker. I don’t think he has 200.”

As of writing, Republicans are only one seat away from reclaiming a House majority, with thirteen races outstanding. House leadership elections are to be held today, and the Senate will hold theirs tomorrow.

Former Freedom Caucus chairman Rep. Andy Biggs has confirmed that he’ll be challenging McCarthy for speaker, and Gaetz has previously floated Trump as a potential pick for the job, which Trump has ruled out.

Biggs does face some opposition within the caucus however, with Rep. Marjorie Taylor Greene voicing concerns that a challenge to McCarthy is too risky.

“I actually think that’s a bad strategy when we’re looking at having a very razor-thin majority, with potentially 219 — we’re talking about one vote,” Greene said on a recent appearance on Steve Bannon's "War Room." “It’s very, very risky right now to produce a leadership challenge, especially for Speaker of the House, when they are going to open the door and allow Liz Cheney, possibly, to become Speaker," she continued.