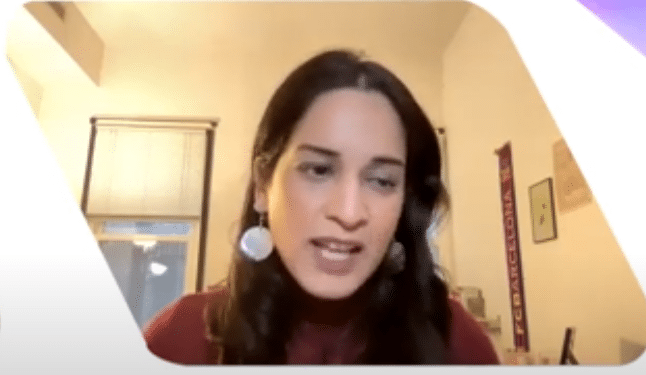 In a newly released video, youth sex offender sympathizer and “Check My Ads” co-founder Nandini Jammi announced a “crackdown” on the “insurrectionists” who she says incited the events on January 6th that have resulted in a total of zero people charged with insurrection. Those tangled in the web of her deranged conspiracy include Dan Bongino, Charlie Kirk, Tucker Carlson, Glenn Beck, Steve Bannon, and Tim Pool (who isn’t even on the right).

The middle-aged activist made the announcement in a particularly hilarious video advertisement to solicit donations for her grifting that we’ve been reliably informed isn’t a parody (though there’s still room for doubt).

“There are a handful of people who push lies in America” the video begins with narration from Check My Ads co-founder Claire Atkin. This certainly is true – and among them are people like Nandini, who once was condemned by B’nai Brith, one of the world’s largest Jewish service organizations, by attempting to cancel a Jewish conservative by falsely branding him a “Neo-Nazi.” Jammi has also been caught on numerous occasions lying about her organization’s “successes” in canceling the advertisers of conversations.

“They do it because it makes them money” Claire continues in the fundraising video released to make money.

Watch the trainwreck yourself below:

NEW: Starting today, we're going to cut off every last one of the insurrectionists from their business model: ads.

As one would expect, the announcement was widely mocked.

Awww, an adorable newborn baby grift. I hope nobody smothers it in its crib. https://t.co/jYGlP5V4e9

How are those shown in video designated as insurrectionists. This is a very dangerous game you are playing and you might want to rethink your strategy.

Good luck! You seem to think people actually take you seriously. Maybe stupid people do. You better have a clean house or your charade will come crashing down eventually. Your business model is unsustainable long term. You don’t add any value. You try to destroy.

Jammi recently made headlines recently after an old blog post of hers surfaced where she argued that young sex offenders should receive reduced punishments. Her blog post was later cited in an academic paper titled  “The Integration of Juvenile Sex Offenders Into Higher Education Institutions.” The paper’s abstract states that it “provides recommendations to university administrators for writing institutional policies that balance the right to an education and the need for safety of juvenile sex offenders and campus communities.” She’s since doubled down on her stance. Of note, Nandini is also an associate of Chad Loder, an “antifa” journalist accused of predator behavior by multiple women.

Just days later, the other co-founder of Check My Ads, Claire Atkin, tweeted out her intention to purchase sexual materials for minors unable to obtain them “Teenagers! If you want to read a book that is banned in your school library because it features ‘sexual or gender identity as a prominent subject DM [direct message] me and I will but and order it to a safe location for you.”

According to their donor wall, Check My Ads has raised fewer than $1,000 in donations since their insane video was posted on January 5th.

That out to keep the lights on!