Even with politics as polarized as it is today, voter ID remains one of the few issues that there’s a bipartisan consensus on – at least among voters.

While Democrat leaders and pundits have resorted to branding support for voter ID analogous to support for Jim Crow (or whatever Jim Eagle is), a majority of African-Americans are among the demographics supporting it.

A new Fox News poll finds 77 percent of voters nationally think “a valid form of state or federally issued photo identification to prove U.S. citizenship” should be needed for voting.  That’s down from a high of 85 percent who felt that way when Fox first asked the same survey question 10 years ago. 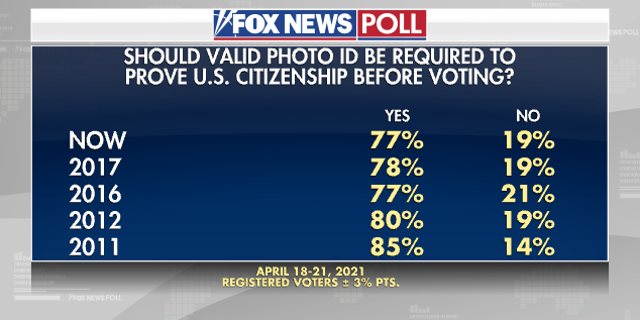 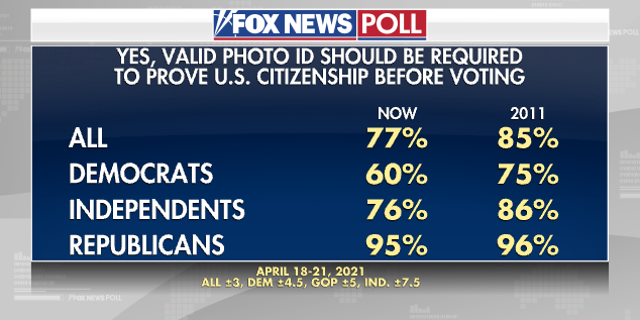 If Democrats want to portray anyone supporting photo ID as “racist,” that includes the majority of their own voter base, and the majority of Blacks… whom they are accusing voter ID supporters of being racist against.

This is hardly the first poll to produce this finding.

Rep. Burgess Owens railed against the hyperbolic “Jim Crow” comparisons during a hearing on voting rights last week. “As someone who has actually experienced Jim Crow laws I’d like to set the record straight,” Owens said, asserting that “any comparison between this law and Jim Crow is absolutely outrageous.”

“What I find extremely offensive is the narrative from the left that Black people are not smart enough, not educated enough, not desirous enough of education to do what every other culture and race does in this country: Get an ID,” he said.

Is it racist to need a photo ID to buy alcohol, tobacco, rent or buy a car, open a bank account, apply for welfare, apply for a job, rent or buy a house, get on an airplane, purchase a gun, rent a hotel room, visit a casino, or buy a cellphone? If not, it remains unclear why voting is the one exception to the “racism” charges.

Study Confirms Fact-Checkers Are In Fact Bad at Their Jobs