The Washington Post has practically pioneered one variant of this type of reporting with a now widely-mocked phrase “Republicans pounce!” which has spread to other publications. The National Review’s Jim Geraghty listed some notable examples:

Perhaps my favorite example of all time came from the Post themselves in the form of the convoluted headline: “Developments in Allegations Against Biden Amplify Efforts to Question his Behavior.” Try saying that five times fast.

In all cases, the focus is taken away from Democrat wrongdoing, and attempts to create the impression that Republicans are doing something wrong in noticing that their opponents are wrong/corrupt/etc.

And it must work to some extent, because the (Failing) New York Times continues to mimic the Bezos blog’s strategy. Dan received texts yesterday from Davey Alba, an alleged journalist for the Times, requesting comment because Dan accurately quoted various leftists in saying that they would cause violence after the election if Trump wins. 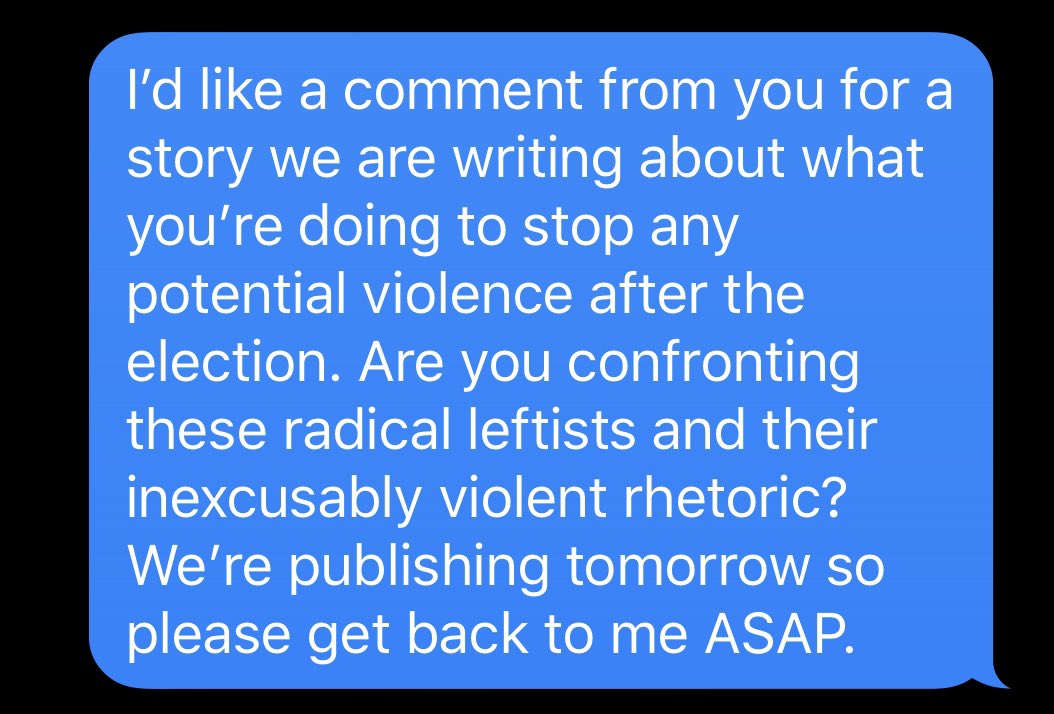 Her request for comment is, of course, completely nonsensical. If leftists are threatening violence, that’s the story. Contact those leftists. I’d ask what she’s bringing us into this for, but we already know.

I received the same call from this NY Times “journalist.” Here was my response so she can’t edit it. https://t.co/9YkgOLV3tM pic.twitter.com/Bv89SFJy8S

Dear .@daveyalba,
Years ago you could’ve gotten away with libelous articles trying to pin instances of leftist’s calls for chaos on conservatives. But those days are over. My audience is larger than yours and I buy ink by the barrel too. It’s over. We know what you’re doing.

Mark Levin says he received a similar request for comment.

LOL, same New York Times "reporter" trying to twist what Bongino has posted as she prepares her propaganda for publication https://t.co/DvhWRb1fSX

Levin responded publicly with the following: “Let me respond publicly to you since I don’t trust the New York Times to get right whatever I say. Uh, Davey, no offense, but you’re not very sharp, This was my sarcastic response to the Democrats, mocking what they’ve been saying for weeks. Democrats like Biden, Clinton, Gore, Pelosi, Podesta, and others. I am deeply concerned about their dog whistles to violent groups like Antifa and BLM, and other Democrat-friendly groups, which deeply worries me. If you were concerned about riling up people, as I am, why didn’t you confront the Democrat Party leadership? The fact is, the New York Times has a horrific history of censorship on the gravest of matters, such as its intentional failure to report about the Holocaust, except in passing; and its publishing of Stalin-planted lies written by its own news reporter, Walter Duranty, when Stalin was starving to death millions of Ukrainians. And you’ve been nowhere over the last several months when the Democrats are talking about using the military against President Trump to remove him from the White House. And, your paper has downplayed the terrible riots and violence that’s been occurring throughout our country. And now you contact me about a post, which is intended to expose the outrageous statements of leading Democrats, and try and twist the entire matter. Shameful. Write as you wish. I will respond, if I do, without interpretation or spin from you.”

We reached out to Alba to ask what she personally was doing to prevent post-election violence from her ideological comrades but received no response.