She first tried to pull a page out of the Kavanuagh playbook, and at one point during the hearing Hirono asked Barrett if she had ever sexually assaulted anyone.

When that line of attack predictably failed, she would later try to insert Twitter drama into the hearing.

Earlier in the day, dimwitted MSNBC producer Kyle Griffin “informed” the world that when Amy Coney Barrett used the term “sexual preference” at one point during the hearing, that was actually somehow offensive because it’s an “offensive and outdated” term. According to his logic, it’s offensive because it implies that sexuality is a choice. This logic makes no sense because there is no shortage of biologically wired behaviors that would predispose people to certain decisions or behaviors we describe as preference (such as having a preference for eating chocolate ice cream over vanilla).

"Sexual preference," a term used by Justice Barrett, is offensive and outdated. The term implies sexuality is a choice. It is not. News organizations should not repeat Justice Barrett's words without providing that important context.

And so scarce are legitimate criticisms of Amy Coney Barrett, that Sen. Hirono saw this as her best line of attack available and ran with it.

Amazingly, while Amy Coney Barrett isn’t yet a member of the Supreme Court, she’s already undone decades of legal precedent from the language police. Just over two weeks ago The Advocate, a “LGBTQ” news site, posted an article where they described a film that features characters “who are comfortable with no they are, no matter what their sexual preference is.” And yesterday, they hopped on the “the term sexual preference is offensive” bandwagon. 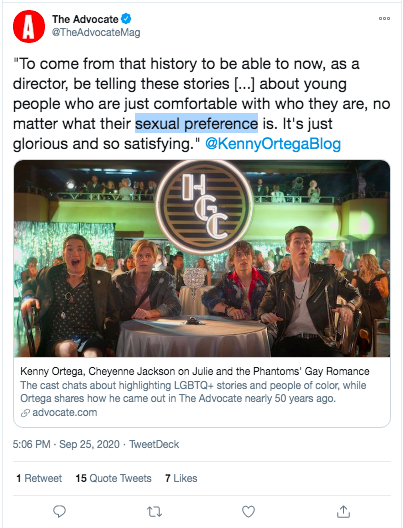 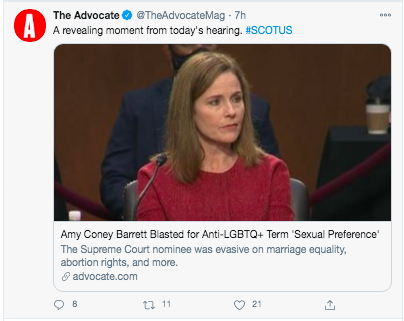 Perhaps they should be the first publication to “cancel” themselves. Or maybe they can just cancel Joe Biden, who used the same exact term in May to no outrage whatsoever.

The Left said Amy Coney Barrett was bigoted because she used the term "sexual preference."

Here's Joe Biden using the same term in May. pic.twitter.com/u7k4MqHCSU

In a more Orwellian feat, Webster’s dictionary literally changed the definition of the word “preference” yesterday to remove “sexual preference” as an example of a use of the word. Newspeak prevails.

As recently as last month, Webster’s Dictionary included a definition of “preference” as “orientation” or “sexual preference.” TODAY they changed it and added the word “offensive."

Insane – I just checked through Wayback Machine and it’s real.

This all raises an obvious question, is being as hysterical as Senate Democrats and the outrage mob a preference?