Fact Checkers: VP Harris Definitely Didn't Say What You Heard Her Say With Your Own Ears 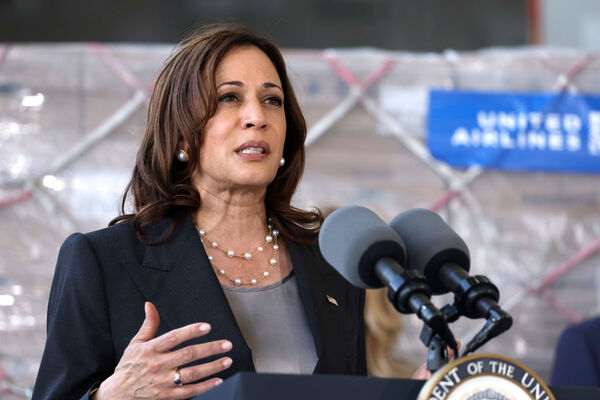 Vice President Harris Meets With Aviation And Transport Workers Receiving Baby Formula Shipment At Dulles Airport by Anna Moneymaker is licensed under Getty Images North America Getty Images
Photos by Getty Images
Once again PolitiFact is here to fact check what you saw with your own eyes and heard with your own ears.

After Vice President Kamala Harris emphasized the need for disaster relief to prioritize "communities of color" (i.e. nonwhite people), the fact checkers mobilized to cast doubt on Harris saying what she in fact said.

In the relevant part of the exchange with host Priyanka Chopra Jones, Harris said: “We have to address this [natural disasters] in a way that is about giving resources based on equity, understanding that we fight for equality, but we also need to fight for equity … sometimes we have to take into account those disparities."

Harris admitted that prioritizing disaster relief is a policy she would like to see advanced, which some interpreted it as Harris admitting that disaster aid for Hurricane Ian would be prioritized in such a way.

The context for the exchange is as follows:

Priyanka Chopra Jones: So just talking about a point that I am very concerned about, and I — as I’m sure so is this room: You and the administration obviously are working around the clock right now to support relief efforts in Florida and to prepare citizens as Hurricane Ian now is closing in on South Carolina.

So, extreme weather conditions like this are becoming obviously more frequent and more severe.  And I wanted to acknowledge the administration for passing the biggest climate legislation –legislation in history earlier this year — (applause) — because it is a fact that America’s leadership sets an example to other major economies around the world, which are truly dragging their feet when it comes to doing their bit.

So can you talk just a little bit about the relief efforts, obviously, of Hurricane Ian and what the administration has been doing to address the climate crisis in the states?

But — and just a little follow up, because this is important to me: We consider the global implications of emissions, right?  The poorest countries are affected the most.

VP Harris: So, first of all, again, thanks to the leadership in this room, which were part of the propelling force in the 2020 election so that we could actually be in office — because one of the requests — dare I say, “demands” — of this group was, “Do something about the climate crisis.”  And so, we were able to be elected.  Thank you, everyone here.

And then have the — (applause) — but — and have, then, $370 billion in the Inflation Reduction Act dedicated to address the climate crisis — not only because it is a crisis, as it evident — as evidenced, as you have mentioned by Ian, by the wildfires happening in California, the floods, the hurricanes, but also because of America’s leadership and what it should be globally on this issue.  And so that has happened, and it will propel a lot of good work.

The crisis is real, and the clock is ticking.  And the urgency with which we must act is without any question.

And the way that we think of it and the way I think of it is both in terms of the human toll and — I know we are all thinking about the families in Florida, in Puerto Rico with Fiona — and what we need to do to help them in terms of an immediate response and aid, but also what we need to do to help restore communities and build communities back up in a way that they can be resilient — not to mention, adapt — to these extreme weather conditions, which are part of the future.

On the point that you made about disparities: You know, when I was — back when I was District Attorney of San Francisco — I was elected in 2003 — I started one of the first environmental justice units of any DA’s office in the country focused on this issue.  And in particular on the disparities, as you have described rightly, which is that it is our lowest income communities and our communities of color that are most impacted by these extreme conditions and impacted by issues that are not of their own making.

Chopra then inquired if "women" also were included in this category, and Harris agreed that they were. It's unclear if this means that white women now qualify as "people of color," but it's not like social justice is supposed to make sense.

Harris then added what would be the most widely clipped and quoted part of the exchange: "And so, we have to address this in a way that is about giving resources based on equity, understanding that we fight for equality, but we also need to fight for equity; understanding that not everyone starts out at the same place.  And if we want people to be in an equal place, sometimes we have to take into account those disparities and do that work."

Harris ignored a subsequent question days later about her statement when a reporter asked her at a Congressional Black Caucus event "Vice President, can you clarify what you meant about equity for hurricane relief?” - though she was being ushered out of the event when she was asked.

But FEMA Director Deane Criswell told CBS News in an interview that relief wouldn't be prioritized in such a way, and Florida Governor Ron DeSantis spokeswoman Christina Pushaw called Harris' statements "false" and said it's “causing undue panic and must be clarified." Whether or not Harris was implying that aid would be prioritized by race for Hurricane Ian is up for interpretation, as she may have been talking about future natural disasters that she questionably blames on "climate change." Either way, Harris either wants to see disaster relief based on so-called "equity," or lied that she's already doing so because she sees it as such a noble cause.

PolitiFact's Jeff Cercone decided to spin VP Harris' comments by creating confusion about what she's alleged to have said in the first place. Instead of focussing on the unquestionably true statement that VP Harris favors prioritizing aid by race, Cercone instead decides to attack the more ambiguous claim that VP Harris' comments imply that such a policy was already happening. To do this, Cercone quotes Sen. Rick Scott as saying to CBS host Margaret Brennan "I think what we got to do is we got to bring everybody together. I'd also say that what Vice President Harris said yesterday or the day before yesterday, that, you know if you have a different skin color, you're going to get relief faster, that’s not helpful either." This single Rick Scott statement is the basis for the entire fact check.

The concept of "environmental justice" on the left is hardly anything new, and the EPA's website under the Biden admin has an entire section on it. It would be more out of character if VP Harris wasn't spouting the kind of rhetoric she's "accused" of - and the great irony of those denying that VP Harris said we should prioritize race in relief aid is that if such a policy were to take effect, they'd be the same people immediately defending it.

Cercone also claims that "There is nothing on websites for FEMA or the federal Disaster Assistance Improvement Program about race or equity, just information about where Floridians affected by Hurricane Ian can find information about how to receive federal aid." Yet a cursory Google search for "Disaster Assistance Improvement Program equity" will turn up an article from FEMA's website with the header "FEMA Makes Changes to Individual Assistance Policies to Advance Equity for Disaster Survivors" as the second search result.

It's also the case that FEMA issued a 2022-2026 strategic plan which openly states its goal is to "instill equity as a foundation of emergency management, lead the whole of community in climate resilience, and promote and sustain a ready FEMA and prepared nation." 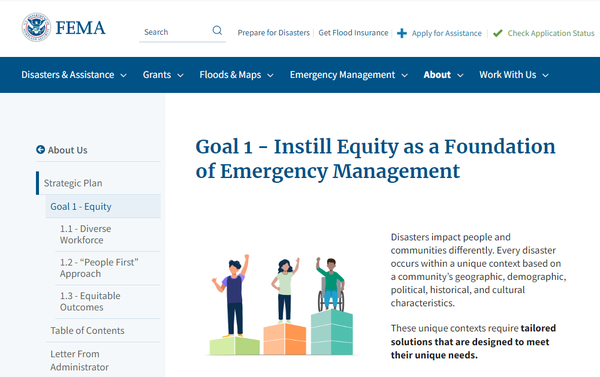 In another section of their website explaining the plan, titled "Objective 1.3 - Achieve Equitable Outcomes for Those We Serve," FEMA uses "underserved communities" as a euphemism for "communities of color," stating that "Underserved communities experience differences in how prepared they are to respond to disasters, how well their homes have been adapted to mitigate against local hazards, and how quickly their communities are able to resume social and economic life after a major event. FEMA must direct its resources to eliminate disparities in these outcomes. FEMA assistance is not designed to solve societal inequities. However, by intentionally directing resources to communities most in need, FEMA will be able to counteract systemic disaster inequities."

The Associated Press fact checker, Reuters fact checker, and FactCheck.org also got in on the action, definitely not-at-all raising suspicions that the "fact checkers" coordinate which absurd narratives they want to declare factual. Like PolitiFact, they all fact checked a tangential false claim (that hurricane ian aid should be based on race) to cover up the true claim (that Harris wishes this were the case).

Matt Palumbo is the author of The Man Behind the Curtain: Inside the Secret Network of George Soros Don't miss the Dan Bongino Show