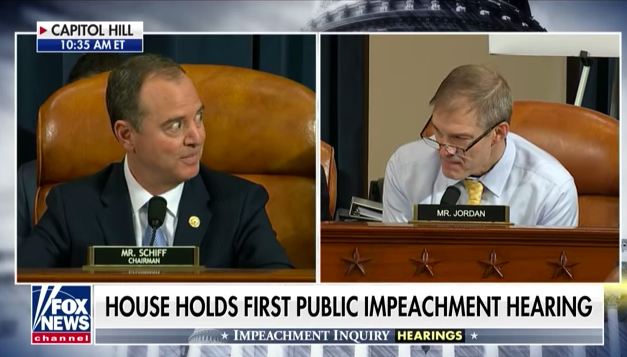 Despite his office’s coordination with the Ukraine “whistleblower,” Russian collusion hoaxer Adam Schiff (D-CA) claims he does not know their identity.

At today’s impeachment hearing, Congressman Jim Jordan (R-OH) asked when lawmakers might have the ability to question the “whistleblower.”

“Of the 435 members of Congress, you are the only member who knows who that individual is. Your staff is the only staff of any member of Congress that’s had a chance to talk with that individual,” Jordan said. “We would like that opportunity. When might that happen in this proceeding?”

Democrat Chairman Adam Schiff: "I do not know the identity of the whistleblower"

“That’s a false statement,” Schiff responded. “I do not know the identity of the whistleblower. I’m determined to make sure that identity is protected … You will have an opportunity after the witnesses testify to make a motion to subpoena any witness and compel a vote.”

Last month, it was revealed that the “whistleblower” sought “informal guidance” from Schiff’s Intelligence Committee before filing their complaint with an inspector general.

Schiff had previously stated that his office had  “not spoken directly to the whistleblower,” however,  he was forced to clarify his remarks in an October appearance on CBS’ “Face the Nation.”

“I should have been much more clear and I said so the minute it was brought to my attention,” Schiff told CBS.