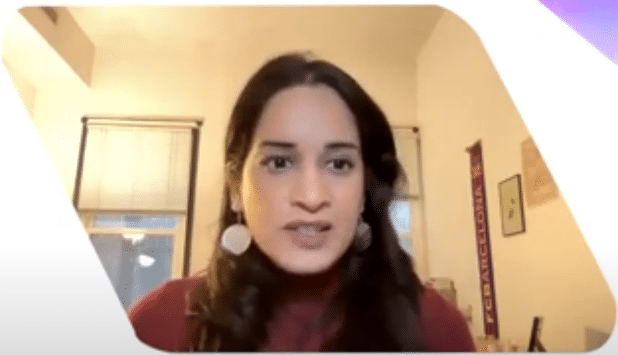 Published in a blog post for the “National Crime Prevention Council” (where she was an intern), Nandini bemoaned the “Eternal Sentence for Juvenile Sex Offenders.” Nandini angrily confirmed she authored the post when reached for comment, which she emphasized was from years ago. Of course, she doesn’t afford the same luxury to those she (usually unsuccessfully) attempts to cancel.

In her article, Nandini argues: “Of course, juvenile sex offenders aren’t toddlers, and they generally know what they are doing is wrong. However, a number of things should be considered before we give them a de facto life sentence by listing them on the Internet along with violent, knowing, and malicious adults.”

She brings up an extremely rare case involving a fourth grader in an attempt to make her case: “Someone like Johnnie, however, (who was referred to by that pseudonym in a New York Times article), may be branded for life. He’s a juvenile sex offender, but he did the crime when he was in fourth grade. That’s the question: would you give a now 14-year old the same “life sentence” that you give a grown man? And if the answer is yes, how would you draw the line between being a teen and being a responsible adult? Can we justify treating a juvenile sex offender as a minor and an adult simultaneously? Perhaps judges should be given discretion in each individual case.”

She then notes that it would simply be better if we could just prevent sexual assault in the first place, a blatantly obvious statement that applies to every possible evil in the world. Of course, punishment and being put on a sex offender registry tends to be a good deterrent!

Nandini concludes with some additional sympathy for youthful sex offenders, writing “However, we do know for sure that the stigma attached with being a known sex offender is harrowing for anyone, especially a teenager. As an earlier NCPC blog states, we need to ensure that offenders ‘make positive connections to the community.’ How do we do that? We’re still working our way through that question.”

Her blog post was later cited in an academic paper titled  “THE INTEGRATION OF JUVENILE SEX OFFENDERS INTO HIGHER EDUCATION INSTITUTIONS.” The paper’s abstract states that it “provides recommendations to university administrators for writing institutional policies that balance the right to an education and the need for safety of juvenile sex offenders and campus communities.”

Notably, Jammi maintains a friendship with Chad Loder, an antifa activist that has been accused of abuse by multiple women. As the Post Millennial revealed:

In August 2020, Twitter user “@sladeofyaupon” posted screenshots of a direct message from Loder where he sent her an unsolicited shirtless photo of himself next to a young child. She wrote: “Women should be able to participate in activist communities without dealing with creepy dudes. I only followed @/chadloder because I thought he would be a useful comrade. I’m angry.”

In May 2021, a second woman posted screenshots of a direct message from Loder making comments on her appearance. “Y’all don’t have to boost this but I just want everyone to be aware this dude hopped in my DMs hitting on me,” she wrote.

So this carreer “activist” @/chadloder is using his main account, with 75,000 followers, to DM unsolicited shirtless photos to women. Seems like he’s used to being able to creep on anyone he wants to bc of his clout.
If you snitch on me for this I’ll k*** you. pic.twitter.com/T5fj9qO1NR

Part 2 Chad Loder trying to impress me w his antifascist resume as a way of flirting or whatever, context to add he obviously was reading my twitter feed at the time & knew fascist/antisemitic hate groups in the PNW were targeting me during this time- def felt uncomfortable vibes pic.twitter.com/UfFPmax7bN

Nandini has refused to respond to countless comments bringing this behavior to her attention.

Perhaps now we know why.