The 20 Greatest Quotes From Rush Limbaugh 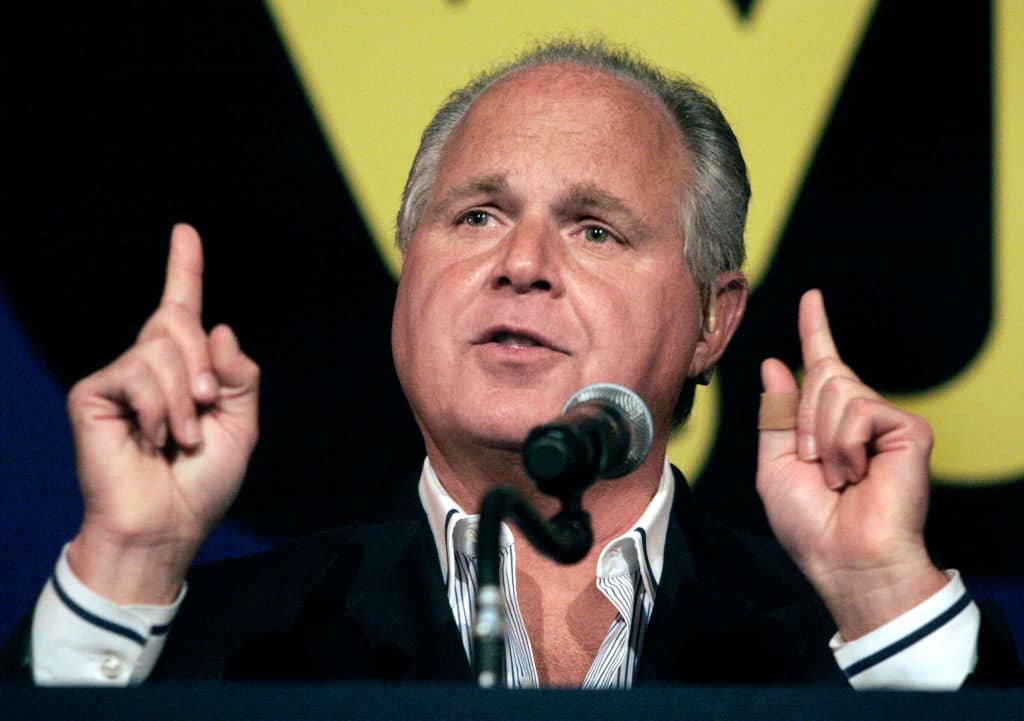 Rush Limbaugh was one of the greatest figures of the last half-century and he could personally take credit for millions of people becoming conservative. He was a legend, an icon and he will be missed. In honor of a great man, here are Rush’s 20 greatest quotes.

20) “The liberals, you see, do not want to confront conservative ideas; they just attack conservatives as a group, and particularly their motives. If you believe what they say about us, you would think that if someone like Bill Bennett, or Jack Kemp, or myself were driving through South Central Los Angeles and looking at the slums and poverty, we would go: Oh, man, this is great – they’ve got nothing, so that means we get more. It’s simply preposterous. We all want to live in a great country. And for the country to fulfill its potential, you need individuals to be the best they can be – not the government taking care of people.”

19) “For government to give, it must first take away.”

17) “Now, what is the left’s worldview in general? What is it? If you had to attach not a philosophy but an attitude to a leftist worldview, it’s one of pessimism and darkness, sadness. They’re never happy, are they? They’re always angry about something. No matter what they get, they’re always angry.”

16) “I’m a huge supporter of women. What I’m not is a supporter of liberalism. Feminism is what I oppose. Feminism has led women astray. I love the women’s movement — especially when walking behind it.”

15) “Liberals always exempt themselves from the rules that they impose on others.”

14) “Bigot: A person who wins an argument with a liberal.”

12) “Conservatism is an active intellectual pursuit; it requires constant vigilance. It has nothing to do with feelings. Liberalism is the most gutless choice you can make. You just see suffering and say, ‘Oh, I feel so horrible!'”

11) “I’m convinced that a lot of people simply don’t know what’s available out there and how it is possible to find a job and work your way up if you are willing to accept responsibility for your life. I know what it’s like to be on the bottom. I’ve been broke. I’ve been fired seven times from jobs. And I don’t even have a college degree. But I didn’t blame anyone else for my problems. I knew that if I didn’t try to solve them on my own or with the help of friends or family members, no one else was going to take care of me.”

10) “I’m not opposed to the protection of animals. But the best way to do that is to make sure some human being owns them.”

9) “Morality is not defined and cannot be defined by individual choice.”

8) “No nation has ever taxed itself into prosperity.”

6) “Let me tell you who we conservatives are: we love people. When we look out over the United States of America, when we are anywhere, when we see a group of people, such as this or anywhere, we see Americans. We see human beings. We don’t see groups. We don’t see victims.”

5) “In a country of children where the option is Santa Claus or work, what wins?”

4) “The world’s biggest problem is the unequal distribution of capitalism. If there were capitalism everywhere, you wouldn’t have food shortages.”

3) “Progress is not striving for economic justice or fairness, but economic growth.”

2) “You know why there’s a Second Amendment? In case the government fails to follow the first one.”

1) “What about feeling sorry for those…who pay the taxes? Those are the people NO ONE ever feels sorry for. They are asked to give and give until they have no more to give. And when they say ‘Enough!’ they are called selfish.”