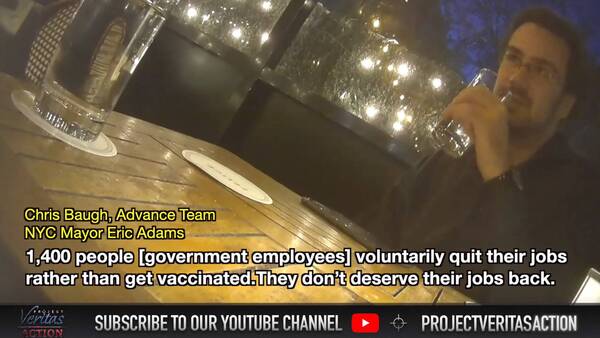 aide by N/A is licensed under N/A N/A
Photos by Getty Images
Earlier in the week, Project Veritas released footage of NYC Mayor Eric Adams' "Advance Team" member Chris Baugh admitting to an undercover PV reporter that his boss isn't capable enough to deal with the buses of illegals being sent from Texas, and that it's been terrible optics for both the Adams and Biden administrations.

In their most recently released video exposing Adams' office, PV captured Baugh expressing scorn for those who lost their jobs over the city's vaccine mandate. “I have no sympathy for them. They made a choice [not to get vaccinated]. They chose not to do a very harmless thing that protects the rest of society. F**k ‘em. 1,400 people voluntarily quit their jobs rather than get vaccinated. They don’t deserve their jobs back,” Baugh said.

He continued to rip his boss in the newly released video, who he described as "corrupt," and mocked his potential presidential ambitions.

He also added some baffling commentary to rising violence against police too. “Being a cop is like the cushiest gig in the city," Baugh said. "Like, you might get shot, but otherwise it’s very good.”

Baugh's firing has likely generated no sympathy from the unvaccinated.