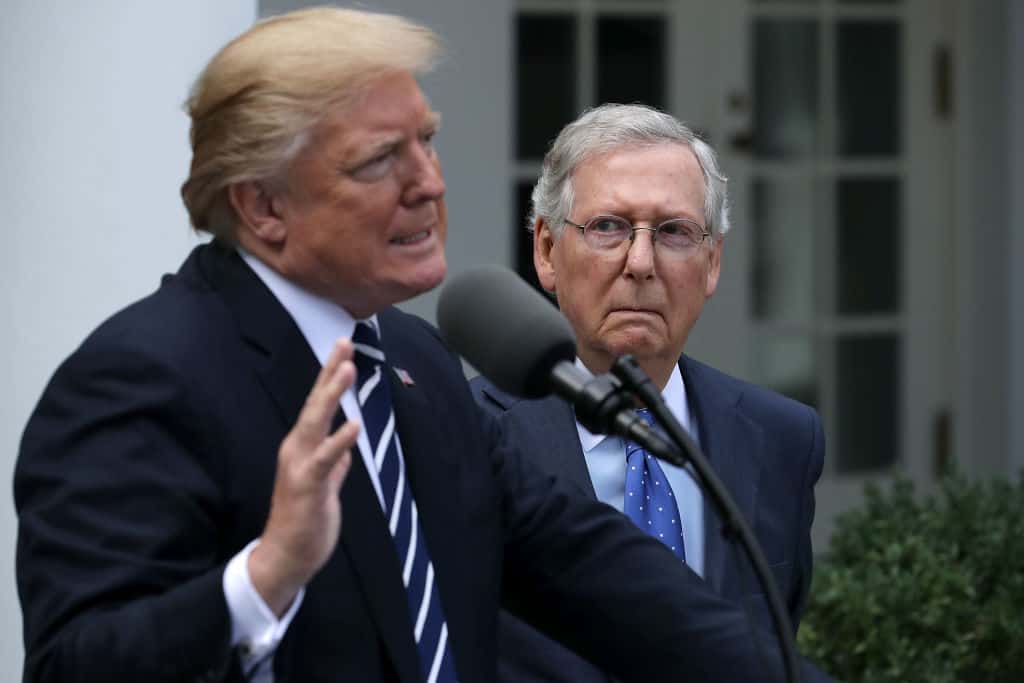 “The Republican Party can never again be respected or strong with political ‘leaders’ like Sen. Mitch McConnell at its helm,” Trump said in a written statement. “McConnell’s dedication to business as usual, status quo policies, together with his lack of political insight, wisdom, skill, and personality, has rapidly driven him from Majority Leader to Minority Leader, and it will only get worse.”

The Statement came after the Senate voted 57-43 for acquit Trump in his second impeachment trial, with McConnell joining 42 other Republicans who voted to acquit.

But McConnell had harsh words for the former president despite his vote, saying that Trump “bears moral responsibility” for the Capitol riots due to his “unhinged falsehoods.”

“There is no question former President Trump bears moral responsibility. His supporters stormed the Capitol because of the unhinged falsehoods he shouted into the world’s largest megaphone,” McConnell wrote. “His behavior during and after the chaos was also unconscionable, from attacking Vice President Mike Pence during the riot to praising the criminals after it ended.”

That speech didn’t sit well with Trump, who accused his former ally of being beholden to the interests of powerful Democrats:

“The Democrats and Chuck Schumer play McConnell like a fiddle — they’ve never had it so good — and they want to keep it that way! We know our America First agenda is a winner, not McConnell’s Beltway First agenda or Biden’s America Last,” Trump said in his statement, adding, “Mitch is a dour, sullen, and unsmiling political hack, and if Republican Senators are going to stay with him, they will not win again. He will never do what needs to be done, or what is right for our Country.”

Trump also threatened to support primary challenges against McConnell and other Republicans that did not remain loyal to him during impeachment:

“Where necessary and appropriate, I will back primary rivals who espouse Making America Great Again and our policy of America First,” Trump said. “We want brilliant, strong, thoughtful, and compassionate leadership. Prior to the pandemic, we produced the greatest economy and jobs numbers in the history of our Country, and likewise, our economic recovery after Covid was the best in the world.”

Trump’s statement comes as polling shows the former president still has the support of the overwhelming majority of GOP voters.

In the latest YouGov/Economist poll, Trump is viewed favorably by a total of 87% of GOP voters, while only 12% of respondents said they viewed him unfavorably.

Meanwhile, McConnell’s support among Republicans continues to tumble, with the poll showing only 36% of GOP voters view him favorably compared to 51% that viewed him unfavorably.