Why Democrats Are Encouraging the Rioting You See Across the Country 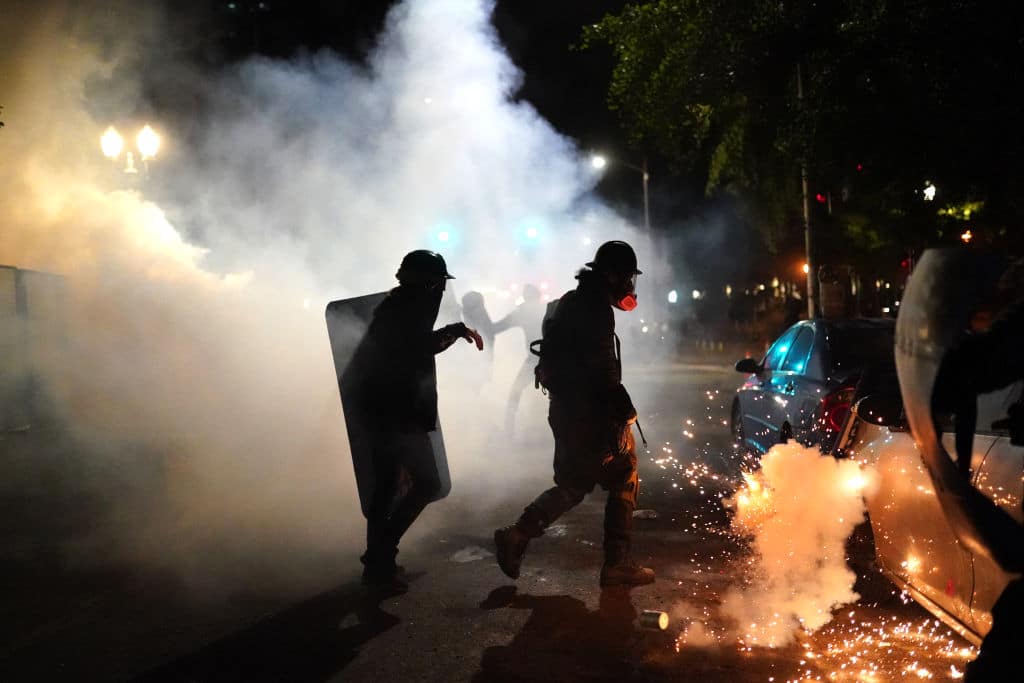 “Rogue states never turn out to be quite the pariahs they are deemed. They are only able to cause, or at least threaten to cause, mayhem because they enjoy the covert support… of one or more major powers within the charmed circle of global ‘good guys.’” — Margaret Thatcher

Margaret Thatcher’s quote about rogue states was true when she said it, is true today and applies to the riots we’ve seen in Portland, Minneapolis, Chicago, DC, Seattle, Kenosha, and NYC among other places. There is no city in America that cannot shut down riots within a day or two, particularly with the help of the National Guard. So, why do we keep seeing recurring riots in these cities?

In DC, not only has there been rioting, we’ve seen supposedly “peaceful protesters” screaming threats in the face of people eating dinner outside at restaurants and attempting to menace them until they declare support for their cause. In Seattle, protesters were allowed to set up an autonomous zone for three weeks and there are multiple lawsuits being filed against the city by residents that suffered because they were unfortunate enough to live in the CHOP zone that was taken over. Portland is creeping past 90 days of civil disturbances, mob violence, and rioting.

On the 95th night of riots and violent protests in Portland, a conservative rally attendee was fatally shot. Upon confirming the deceased wasn’t one of theirs, antifa & BLM cheered & danced in the street outside the Justice Center. #PortlandRiots https://t.co/sMt5wQYUqY

If this behavior could easily be stopped by the people in charge – and it could – why is it continuing? Because Democrats, in a sociopathic political calculation, have decided it may benefit them. That sounds crazy at first, right? How would they benefit by allowing their own cities to be looted and burned? Easy. By blaming the whole thing on Donald Trump. That sounds bizarre to a thinking person, right?

Yet, that is exactly what they’re trying to do. Here’s Joe Biden’s senior advisor making that case:

“We are not going to take these lies lying down,” Senior Advisor to Joe Biden, Symone Sanders says of falsehoods spread by the Trump campaign. “If you want to ask, ‘Are you safe?’ The question is are you safe in Donald Trump’s America?”https://t.co/5bqaCM7XPQ

Here’s Biden himself saying something similar, but with more of a, “You sure have a nice country here. It would sure be a shame if something happened to it,” vibe:

Does anyone believe there will be less violence in America if Donald Trump is reelected?

So, would Democrats really allow their own cities to be ravaged if they believed it would help Joe Biden get into office? Absolutely, because there are no lengths to which they will not go in order to get back in power. Furthermore, if Joe Biden does get into office, he’ll send them your tax dollars to pay for all the damage they allowed to happen in order to help get him into office. So, it’s not a cost-free proposition for liberals, but they believe the juice is worth the squeeze and have taken step-after-step to help keep the riots going.

At the national level, you have pro-sports teams boycotting games and speaking out incessantly on behalf of criminals that get hurt or killed in conflicts with the police while showing complete indifference as to whether cops die, businesses get burned, or ordinary people get hurt. Lebron James’ may weep for a career criminal that gets killed by a cop, but if you get your head smashed in with a brick or your business destroyed as a result, he’s fine with that. Meanwhile, the mainstream media goes out of their way to sanitize what’s happening. For example, we’ve seen multiple reporters try to describe what’s happening as peaceful even as buildings burn in the background:

"This mostly a protest. It is not, generally speaking, unruly.

But fires have been started."

MSNBC reporter says protests in Minneapolis are not "generally speaking, unruly" as buildings burn in the background. pic.twitter.com/IzzEmKgxhM

For CNN, arson is a peaceful act except, I guess, if someone torches the CNN building pic.twitter.com/OcELNZHvHV

Of course, the real heavy lifting has been done on the ground, by government officials in the affected areas. They’ve demonized the police at every opportunity, turned criminals into sainted martyrs, and they’ve also taken more concrete steps to keep the riots going. Liberal prosecutors have gone after citizens that defend themselves like the McCloskey’s in St. Louis and Kyle Rittenhouse in Kenosha, have prevented the police in places like Seattle from using tear gas to help get mobs under control, have regularly refused help from the federal government, and even, in some places, like Portland, the help of the National Guard. If you had more than 90 days of civil unrest, why wouldn’t the National Guard be on hand unless your goal was to keep the rioting going?

However, the most important thing (for their agenda) many liberal cities have done by far is to simply refuse to prosecute rioters for low-level crimes. It doesn’t matter what the crime may be, if you aren’t going to get in trouble even if you get caught, a certain percentage of people are going to do it. This is something the police have acknowledged in places like NYC and Portland.

It does no good for the police to arrest people if the liberal prosecutors are going to give them a get-out-of-jail-free card afterward for all but the most serious crimes. Yet, that is exactly what has happened in places like NYC, Portland, Chicago, Los Angeles, and DC.

Why do you think ongoing rioting is occurring almost exclusively in areas run by Joe Biden’s supporters? In Republican-run areas that believe in law and order, where the population is armed, the prosecutors aren’t trying to help the rioters as much as possible, rioting isn’t seen as a way to potentially help Joe Biden, to whom mobs are in short supply. Where the rioting is happening is not a coincidence and people had better realize it. If they don’t and Joe Biden wins, the conclusion liberals will draw is that they will be rewarded with political power for rioting, looting, and burning cities. Then, when the money starts flowing to the cities that rioted and Biden’s DOJ starts harassing police forces that don’t allow widespread disorder, you have no idea how bad it could potentially get where you live.

John Hawkins runs the men’s website Brass Pills, is the author of 101 Things All Young Adults Should Know and you can find him on Parler here.